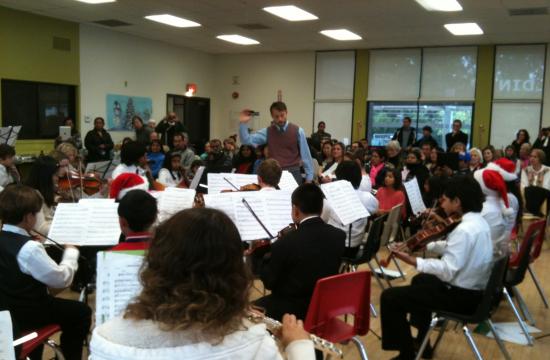 The audience was hushed and proud with good reason. They were the parents and family and friends and supporters of the student musicians playing the first Holiday Concert of the new Santa Monica Youth Orchestra (SMYO).

All Santa Monica students are welcome to join the orchestra. To be a member of SMYO you need to be a student at a Santa Monica public school, private school, or live in Santa Monica and be home schooled. The founder of SMYO, Shabnam (Shab) Fasa, said, “We don’t audition. We take everyone. We don’t ask anyone to pay.”

SMYO is based on El Sistema, a government sponsored program of music education in Venezuela. Los Angeles Philharmonic’s beloved conductor Gustavo Dudamel is originally from Venezuela, had studied with El Sistema, and made starting a youth orchestra in Los Angeles a part of his contract with the LA Philharmonic. El Sistema music education goals are to teach students to make and love music and to become members of the international community of music. Fasa had the opportunity to work with Dudamel at the Youth Orchestra of LA and that gave her the confidence to start the SMYO.

Shab Fasa works as a Manager for Community Corp in Santa Monica. She studied at SMC and then went on to get a degree in Ethnomusicology from UCLA.

She was born in Iran. Her mother, who had studied at Berkeley, left Iran because of the revolution and brought her family to Denmark where they were granted political asylum.

In Denmark, as part of her schooling, her mother gave her a choice, “Study the piano or study the violin.” She chose the violin because she wanted to be able to carry her instrument and because she fell in love with the Brahms Violin Concerto.

“The cool thing about the symphony for kids is that they become part of a collaborative body of sound. You are dependent on everyone else in the orchestra to be able to make a great sound. It makes you humble and it makes you proud at the same time,” said Fasa. “I felt part of the community in Denmark because I was a violinist. The feelings of togetherness in an orchestra bring people together across boundaries.”

She and her family moved from Denmark to the US in 2002 and, after trying a few other places, landed in Santa Monica.

“I did my research and Santa Monica is where I wanted our family to live,” Fasa said.

In January of 2012 she and Julius Carlson and Damien Berdakin, the original music mentors of the SMYO, held their first rehearsal.

“We invited 400 kids and nine kids showed up,” she exclaimed.

There are now 49 student musicians in the SMYO.

Shab Fasa is the founder of SMYO, a violinist and the violin instructor.

Bassist, cellist, and luthier Gabriel (Gabo) Golden mentors the cello students. He studied at Oberlin Conservatory of Music and at the USC Thornton School of Music. He performs with Les Surprises Baroque and with Tessarae. Musicologist and classical guitarist Julius Carlson mentors the students and teaches the history of music. He studied at the University of Chile and at UCLA and is the editor of UCLA’s Ethnomusicology Review.

With their conductor in front of them and their mentors interspersed among them, the students began an almost two hour rehearsal. It got off to a cacophonous start and I watched with admiration as Dudenhostel gently, carefully, charmingly and with demanding expectation brought the students together into an orchestra.

The concert opened with a holiday medley of Joy to the World, O Come All Ye Faithful, Hark the Herald Angels Sing and Silent Night. They then played “In the Bleak Midwinter” by Gustav Holst and closed the concert with selections from Tchaikovsky’s Nutcracker ballet.

As a treat for the students and audience alike the conductor and the mentors brought out their own instruments and played a gorgeous interpretation of Rock of Ages.

The gift to the students is the gift of learning music. Through music study they learn focus and concentration, learn about the music of their own and other cultures, and as Fasa thoughtfully said, “The students learn to access their own inner world and to have respect for their own imagination and for being able to be with each other.”

The people working to make all this possible are Board Members Dorothy Chapman, Deborah Bogen, Betsy Hiteshew, Melissa Sweeney and Irene Zivi, the Cultural Affairs Department of the City, the Boys and Girls Club and the families of the student musicians.

The afternoon was a gift of music for all of us in the filled to capacity Thelma Terry Center at Virginia Avenue Park. It is a gift of generosity from the teachers and mentors and supporters. It was a gift of inspiration to take with us into the New Year.