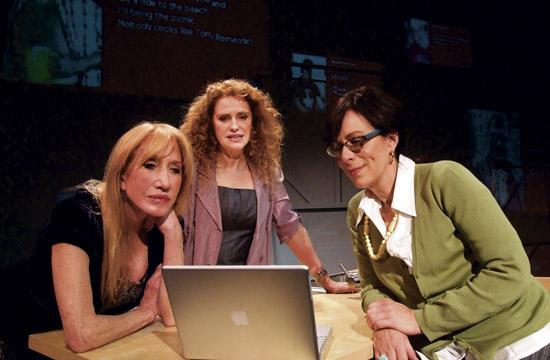 In a yeoman’s attempt at illuminating the emotional challenges of single life in the middle years, whether by divorce or death of a spouse, “The Snake Can” runs adrift with uneven direction by Steven Robman, spotty narrative by Kathryn Graf, and an inconsistent acting ensemble.

Briefly, the story, based on Graf’s own life, centers around three friends – Harriet played by the very talented Jane Kaczmarek, Meg played by stage trooper Sharon Sharth, and Nina played by Diane Cary. They are each in a different stage of singlehood. Kaczmarek’s Harriet is a widow of seven years and on the anniversary of her young husband’s death, decides to roll up her sleeves and reluctantly enter the world of Internet dating. Despite an interminable silly attempt to open a wine bottle at the beginning of the play, Kaczmarek, who lights up the stage with her consistent theatrical presence, gives one of the most outstanding performances of the evening and manages to delve deeply into the many layers of her complicated character.

Single for 10 years, Harriet’s good friend Meg, has had two unsuccessful marriages and bemoans the fact that she hasn’t had sex in years and that seems to be her primary goal – to get laid at the earliest moment, but despite her attempts, she keeps coming up empty, so to speak. She has one of the funniest lines in the play when she says, “I haven’t had sex in seven years; that’s not longing, that’s a medical emergency.” She warns Harriet of the perils of Internet dating citing instances where a guy could be married or in a relationship or not even living in her state.

Despite these warnings, Harriet engages in an email chat with Stephen, wonderfully played by James Lancaster, whose background with Ireland’s famed The Abbey Theatre and the Irish Theatre Company serve him well as the gentleman whom Harriet feels is a good match. He is a confessed bi-sexual but they become lovers and what is true of so many relationships, doubts begin to surface at which time he assures Harriet that he wants a committed, monogamous, heterosexual relationship.

Perhaps the most miscast person is Diane Cary who plays Nina. She recently separated from her actor husband to pursue an art career, but with a few exceptions, Cary doesn’t transcend line readings and throws away a lot of her dialogue. Again, given the lack of her technical skills, some directorial shaping of this character might have resulted in a different outcome. Gregory Harrison plays her husband Paul who laments that he just wants his life back and at the same time, tries desperately to seduce Nina’s best friend Meg who, despite her attraction, declines in the name of her friendship with Nina.

The last member of the ensemble is Joel Polis who plays two roles – Jake, a CPA who does not want to get intimate and Brad, one of Stephen’s former lovers. His character is a stereotypical, swishy gay with nothing much below the surface of the swish.

Another failure in direction was the uneven pacing with some of the pauses between cues big enough to drive a Mack truck through which could be attributed to either the actors going up on their lines or lack of guidance.

The technical aspects of the show were adequate but what in the world was Costume Designer Miguel Montalvo thinking dressing his cast in what looked like thrift-store rejects? Ill-fitting, wrinkled, unflattering dresses, and mismatched, drab colors did nothing to enhance the actors and in fact, detracted from the proceedings as one wondered why a costume designer would dress his actors, all of whom were supposed to be successful people, in such shabby clothing which detracted from the reality of who their characters were supposed to be.

With the single population in America at a record high, coupled with the isolation of our daily lives, Internet dating has become a viable and an expedient method of trying to meet someone, so a story of this nature is relevant and timely, despite it being flawed. Horror stories abound and friends do warn each other about the dangers – don’t have him pick you up, meet in a public place, don’t give your last name, etc., etc., and although Kaczmarek and Lancaster manage to keep the proceedings at a theatrical level, the play almost gets stuck at soap opera level.

“The Snake Can” refers to a children’s toy in a tin can that when you turn the handle, a snake pops up to surprise you. I suppose this is meant to be a dating metaphor in that you never know what surprises await you on that first Internet date. A bit obtuse, for sure.