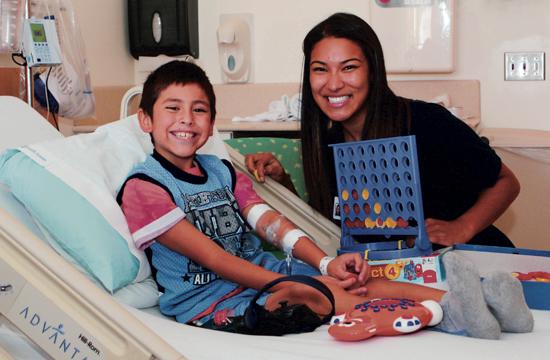 College students considering careers in healthcare don’t usually get to try out the field before committing to it as their area of study. But at UCLA Medical Center, Santa Monica, students are getting a firsthand look at what it’s like to work in the hospital before they decide to pursue a career in medicine, nursing, pharmacy, or a related health field.

Called the Care Extender Internship Program, this novel program has been in existence at UCLA since 1994 and provides services that are beneficial to both students and hospital staff.

Silva Thomas, who manages the program, actually began as one of its early participants while attending UCLA in 1996.

“I gained invaluable insight as a care extender when I was a UCLA biochemistry major interested in pursuing pharmacy,” Thomas said. “However, after spending considerable time in the hospital as a care extender, I realized I probably was better suited for healthcare management.”

Consequently, Thomas started working as a volunteer to manage the program and was later hired to direct it.

The Care Extender program began at UCLA’s Santa Monica campus and was later expanded to its Westwood location.

Approximately 550 students are enrolled annually in the year-long internship program, which is run by student volunteers who earn leadership opportunities through their participation.

To become a care extender, students undergo a competitive process consisting of an entrance application and a series of interviews. After acceptance, each care extender is assigned to a specific hospital area for a 13-week period, followed by rotations through other hospital departments during the year.

In addition to getting a firsthand look at health careers, care extenders do exactly what their title implies – extend the services provided to hospital patients and visitors. Dr. Wally Ghurabi, medical director of the Nethercutt Emergency Center at UCLA Medical Center, Santa Monica, has worked with many care extenders throughout the years.

“We like having care extenders in our department because it’s satisfying to help launch a student’s future medical career,” Ghurabi said.

“The students also provide a lot of assistance within the department. Care extenders assigned to the ER may get to watch physicians perform medical procedures such as suturing or draining fluids. At the same time they may be asked to run an errand, help transport a patient, or simply help with tasks to comfort patients and their families.”

Of the thousands of students who have come through the Care Extender program since its inception, approximately 85 percent have gone on to pursue medical careers.

Tigran Garabekyan participated as a care extender during his junior year as a UCLA undergraduate majoring in chemical engineering.

After his experience in the program, he realized that a career in chemical engineering wouldn’t fulfill him and changed his major to pre-medicine.

Ten years later, Garabekyan is finishing his residency in orthopaedic surgery and is on his way to practicing as a physician.

“The Care Extender program gave me the opportunity to interact with patients and while I was participating in it, something clicked,” Garabekyan said. “I was recognized as someone who was valuable. It felt very meaningful to be part of it.”

Another program alum, Erica Djen, now is working as an ICU nurse at Ronald Reagan UCLA Medical Center. Djen was a care extender for a year while studying at the UCLA School of Nursing and credits the experience for solidifying her decision to work in nursing.

“I wanted to obtain more experience interacting with patients before my clinical rotations began, which is why I chose to become a care extender,” Djen said. “The experience helped me become more comfortable with bedside skills and I also had an opportunity to meet many people, some of whom still remembered me when I was applying for and started working in the unit.”

New care extenders are recruited for the program four times per year: February, May, August, and November.

To find out more about the program, visit www.uclahealth.org/careextender.