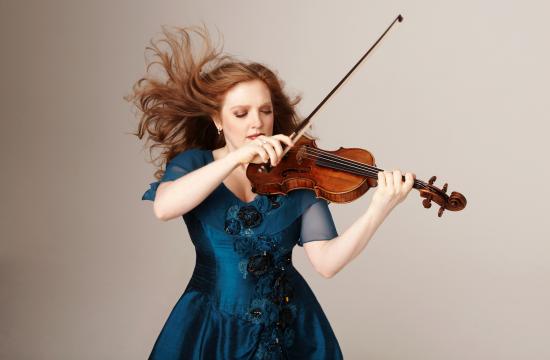 A virtuosic violinist, philanthropist, educator, and music detective, Rachel Barton Pine has earned critical acclaim for her many recordings and orchestra performances around the world.

The Santa Monica community is in for a treat this weekend when she performs as a special guest at three concerts with New West Symphony – the third and final performance on Sunday at 4 pm will be held at Barnum Hall on the campus of Santa Monica High School.

Pine will be playing Piotr Ilyich Tchaikovsky’s Concerto for Violin & Orchestra in D Major, Opus 35. The program will also include Ludwig van Beethoven’s Symphony No. 3 in E-flat Major, Opus 55 (Eroica).

Pine said she had heard good things about the New West Symphony and she was looking forward to working with Maestro Boris Brott as well as the chance to visit Los Angeles.

“I live in Chicago and a lot of my other performances this winter are in locations that are equally cold and snowy, so I have to admit I’m really happy to be engaged by an orchestra in Southern California in the month of February,” she said.

She said Tchaikovsky was one of the most exciting and beloved concertos in the repertoire.

“The first movement is full of passion and fireworks, the second movement is very plaintive and lyrical, and the last movement is thrilling and exuberant,” she said. “It’s always one of my favorites to perform.”

Pine, who lives in downtown Chicago with her husband and baby when she’s not performing around the country, said next weekend would be her first time playing with the New West Symphony orchestra.

However, she said she has performed with many orchestras in California, saying it’s likely she has played with some of the musicians before.

It is also interesting to note that she plays a violin made in 1742 by Joseph Guarneri “del Gesu.”

“Guarneri and Stradivari are considered to be the two greatest violin makers of all time,” she said. “In the 19th century this violin was chosen by Brahms for one of his protégées Marie Soldat, so it has the nickname ‘ex-Soldat.’ The violin is beautiful for any repertoire, but its voice is particularly perfect for any of the romantic concertos like Brahms or Tchaikovsky.”

Founding music director and conductor laureate Boris Brott will conduct all three performances of the program next weekend.

The first performance will take place on Friday, Feb. 22 at 8 pm at the Oxnard Performing Arts Center, located at 800 Hobson Way in Oxnard.

The program will be repeated on Saturday, Feb. 23 at 8 pm at the Bank of America Performing Arts Center at the Thousand Oaks Civic Arts Plaza, located at 2100 Thousand Oaks Boulevard in Thousand Oaks.

On Sunday, Feb. 24, the performance will be held at 4 pm at Santa Monica’s Barnum Hall, located at 601 Pico Boulevard in Santa Monica.