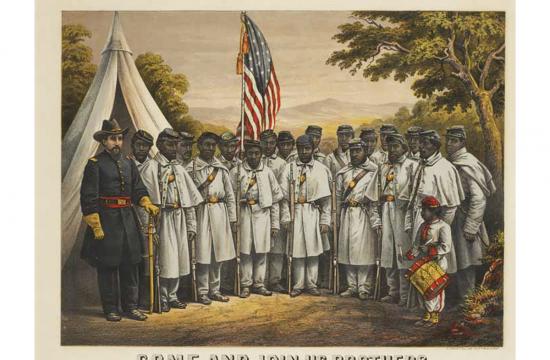 A rare and historically rich assembly of art and materials that has been exhibited throughout the United States will go on display at Santa Monica College’s Performing Arts Center on Santa Monica Boulevard at 11th Street later this month.

Coming during African American Heritage Month, the show — which has toured eight cities and been seen by more than three million visitors — will be in the gallery Feb. 12-March 9. An opening reception will be held from 6 p.m. to 8 p.m., preceded by a book signing and gallery tour led by the Kinseys from 4 p.m. to 5 p.m.

The Kinseys, of Pacific Palisades, have explored and celebrated their African American heritage by collecting items of historical and cultural significance throughout their more than 40-year marriage. They include a copy of an early version of the Emancipation Proclamation, correspondence between Malcolm X and Alex Haley, and a reproduction of a 1773 first-edition copy of poems by Phillis Wheatley. The collection spans nearly four centuries and documents the hardships and triumphs of the African American experience.

The SMC exhibit will feature 26 original art works and nearly 40 original items, artifacts, articles, posters, graphics, writings, photos and books – with detailed information next to each piece explaining their significance, said Art Gallery Director Marian Winsryg. The historical pieces will be in chronological order with original art works interspersed throughout.

“This is an extraordinary collection that will give our students and community a unique and up-close perspective on the profound African American cultural and historical impact on the United States,” Winsryg said.

The Kinsey Collection will open at Walt Disney World Resort, Epcot Center, beginning March 2013 through March 2016 to seen by millions around the world.

This is the first time pieces from the collection have been at an institution of higher education, to the delight of Kinseys, who have lectured at colleges and universities throughout the U.S. and China.

“We love talking to young people about American history and the achievements of the African American community,” Bernard Kinsey said.

“Our collection brings to light the extraordinary triumphs and accomplishments of our ancestors, and in doing so gives these individuals a voice, a personality and a name,” he said.

A richly illustrated, 198-page coffee table book, “The Kinsey Collection: Shared Treasures of Bernard and Shirley Kinsey – where Art and History Intersect,” accompanies the exhibition. Copies of the book will be on sale in the Art Gallery and on their website, www.thekinseycollection.com.

The book has also been adopted by the State of Florida to teach African American history to an estimated 3.5 million K-12 students.

The Kinseys met as students at Florida A&M University and eventually moved to Los Angeles. In 1991, Bernard Kinsey retired from Xerox Corp. as a vice president, and then-Mayor Tom Bradley appointed him to be co-chair of Rebuild Los Angeles, aimed at attracting investments to the city after the 1992 riots.

As a business consultant, he has provided economic advice to governments all over the world.

The Kinseys’ son Khalil Kinsey is the operations manager and manages the day-to-day operations of the Kinsey Collection and Kinsey Foundation.

The Kinseys have raised millions of dollars for numerous educational organizations and college programs, including Florida A&M University.