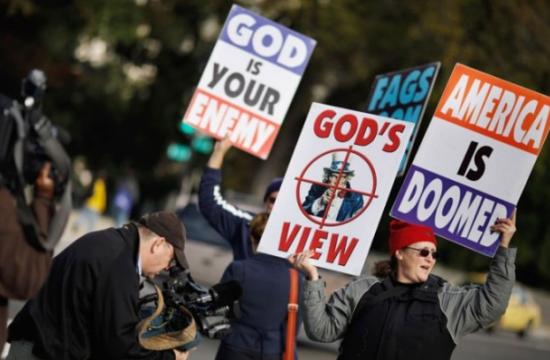 Kansas-based Westboro Baptist Church, a controversial anti-gay group that regularly stages protests around the country as often as several times a week, has announced it will picket Santa Monica High School the day after it plans to picket the Academy Awards.

Earlier this week, the group announced a handful of its members would picket outside Samohi on Monday, Feb. 25 from 7 am to 8 am.

The group said the picket’s purpose was to “tell students the Gospel truth which their parents, teachers and preachers try desperately to hide from them.”

“We will give your children an opportunity to see what truth looks like, the face of what they were entitled to have from every adult that ever touched their lives,” reads a news release on its website. “You brutish teachers and hateful parents have broken the moral compass of this generation, teaching rebellion with everything you say and do.”

News of the picket has spread throughout the school community in the past few days, which has been cause for concern for some parents.

“Is there a plan in place regarding the Westboro Baptist Church’s intent to picket Samohi,” parent Leslie Wizan wrote in an open letter to SMMUSD leaders, the Police Department, and local media. “Will there be a police presence that morning around the high school?  What does the SMMUSD and Samohi administration intend to do about student safety?”

SMMUSD School Board President Laurie Lieberman responded to the letter, saying she wanted to assure the community that the District was aware of the situation.

She said administrators had begun working with the Santa Monica Police Department on a plan for the Feb. 25 picket, should it actually occur.

“Samohi’s principal, Laurel Fretz, has just informed Samohi staff about the components of the plan and parents can expect to receive information shortly,” Lieberman said. “The plan will certainly include a police presence. As always, student safety is our priority. The District will be working to ensure that our students are not only safe, but that a protest, should it occur, will not interfere with the school day.”

Westboro Baptist Church members also plan to picket at three Malibu locations (Malibu Presbyterian, Waveside Church, and Our Lady of Malibu) on Sunday, Feb. 24 before heading to Hollywood to picket outside the Academy Awards.