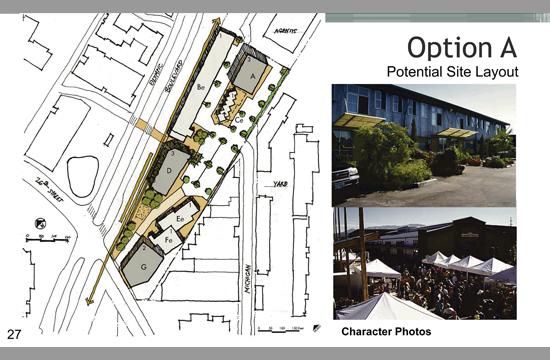 One week after the Santa Monica Planning Commission discussed and analyzed the draft Bergamot Area Plan, the discussion continues.

Commissioners resumed the Bergamot Area Plan discussion at their Feb. 20 meeting in Council Chambers, with both city officials and residents alike trying to shape and mold the document before its ultimate implementation.

Public input was originally scheduled to be part of the commission’s Feb. 13 meeting, and a few speakers did approach the dais. However, commissioners discussed the Plan for nearly six hours and the agenda item was continued to this week’s meeting, where more public input was expected.

The City staff presentation was actually split up into two parts: a general overview of land use districts, development and street standards, and design guidelines, followed by a more specific discussion on circulation and parking, art and culture, and utility infrastructure.

The plan, which is 230-pages in length, aims to guide future land use in Santa Monica and promote sustainable development. According to City staff, the Bergamot Area Plan hopes to conserve 96 percent of Santa Monica’s land area and focus land use changes to commercial and industrial land in the municipality’s other four percent.

“In order for Santa Monica to achieve the goals for sustainability and prosperity contained in the LUCE, areas such as the Bergamot Plan area cannot merely change. They must be transformed so they function in a completely different and much more sustainable way,” City staff stated.

Once complete, the plan will be a guiding document on how Bergamot Station and the surrounding area would be redeveloped. A major component of the new Bergamot Area: the first station for Expo Line riders traveling into Santa Monica.

Beyond the Expo Line, the Bergamot Area Plan also “provides policies and strategies to both conserve and shape the cultural, economic, and urban design characteristics of this emerging area.”

City staff added the Bergamot Area would be a mixed-used arts district where locals can live, play, and work.

“The Bergamot Plan area has been envisioned as a ‘complete neighborhood’ that will guide an eventual transition from a former industrial zone to a well-designed, walkable urban place where people live, work in primarily creative industries and have access to an array of retail services and amenities by foot, bike, bus and train,” City staff stated.

Though the Bergamot Area Plan’s master design is to create a “complete neighborhood,” commissioners honed in on what would indeed make a neighborhood complete.

The diversity of housing units would be in the Bergamot area was a key concern of commissioners.

To that point, Commissioner Jim Ries said the plan should give priority to housing over jobs.

Council members are expected to finally vote on the Bergamot Area Plan in the summer.