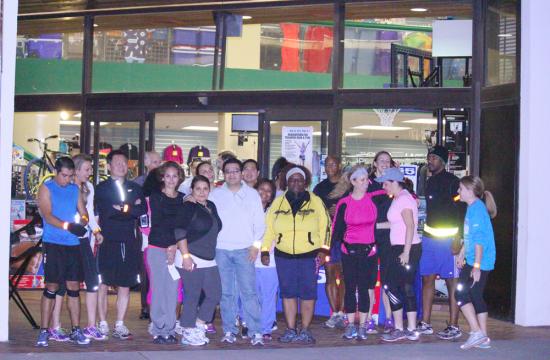 With a little over a month left to go until the LA Marathon, runners have already starting their LA Marathon training with a 5K night run led by ultra-marathoner Julie Weiss along Wilshire Blvd. in Santa Monica Wednesday night.

The upcoming LA Marathon on March 17 is a 26 mile long race and requires stamina to complete.

Rick Gridley of Big 5 Sporting Goods was in charge of organizing the first free training run and gave reasons why Big 5 chose to sponsor the upcoming LA Marathon.

“We felt that the LA Marathon is so ingrained in Los Angeles and that the brand tied really well with the addition of the scenic Stadium to the Sea route,” said Gridley. “We definitely need healthier lifestyles and the LA Marathon provides that. Particularly with the LA Big 5K, a 5K race is a race that anyone can do.”

A crowd of eager LA Marathon runners gathered outside of a Big 5 on 3121 Wilshire Blvd to follow Weiss during a night where Big 5 sponsored the 5K running event by offering a variety of goodies cherished by runners such as hats, water bottles, Clif Bars, and more.

Weiss, an ultra-marathoner currently running 52 marathons in 52 weeks to raise money for pancreatic cancer, is prepared to help train LA Marathon 2013 runners and get runners fit for the race.

“I am very excited to run one of my most favorite marathons in the world,” said Weiss. “It is as if I see the light at end of the tunnel, not just because it is my final marathon of the 52, but because it is symbolic to my mission of bringing us one step closer to finding a cure for pancreatic cancer. It has been a real honor to raise so much awareness for pancreatic cancer and all those affected.”

Big 5, a sporting store headquartered in Los Angeles, has a similar view as Weiss and has been known a promoter of healthy lifestyles and seller of sporting goods in Los Angeles since 1955.

Gridley believes that the LA Marathon’s commitment to health and fitness led to the choice of Big 5 Sporting Goods to sponsor the event.

“Running is a very good insurance to health and fitness and a healthy lifestyle and we find that when you put people together to run, it can be competitive,” said Gridley.

Gridley urges people who have been thinking about running the LA Marathon to sign up for the upcoming race.

“Now is the time to try it and build yourself up to a marathon,” said Gridley.

The LA Marathon is open to people of all ages and running abilities.

Additional training runs will take place at these Big 5 locations:

More information on the LA Marathon and how to sign-up for the event Sunday, March 17 go to www.lamarathon.com