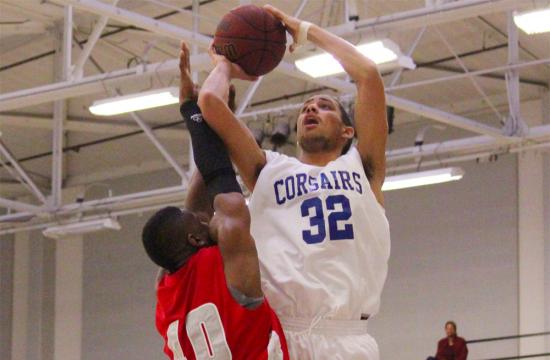 Santa Monica College (12-7) came out of the gates with all guns firing against Bakersfield College (9-11) showing just how good the Corsairs could be when they wanted to be by slapping the Renegades down in a heated basketball battle 96-86 at home Saturday afternoon.

SMC Basketball Head Coach Jerome Jenkins was proud of the way the Corsairs improved the way they compete in the win against the Renegades.

“We took on the challenge tonight to come out and play hard,” said Jenkins.

With the conference win, the Corsairs now stand at third place in the Western State South Division at 3-3 and hold a good chance at going to the playoffs pending the results of the final conference games.

Early in the game, SMC and Bakersfield traded baskets until the Corsairs went on a 10-2 run starting with SMC forward David Nwaba who dunked the ball off a breakaway to provide the spark for the Corsairs.

SMC guard Madison Higgins cashed in on the momentum adding a basket inside the paint that left SMC three-point specialist Adam Griffen wide open on the Corsairs next offensive run to swish in his characteristic three-point shot taken deep from the left side.

SMC Guard Keilan Horton added a basket with 13:03 on the clock and the Corsairs extended their lead by eight points at 19-10.

With 7:48 left to play in the first half, another powerful Corsair emerged in forward Admasu Williams who was not only a force on defense against the Renegades but emerged to become a force on offense scoring a deuce to put the Corsairs ahead at 30-16 concluding an 11-6 run.

Williams, who blossomed in the game against the Renegades, would go onto score 4-5 baskets from the field for eight points before leaving the game with a bloodied nose.

“We are not sure about Admassu Williams yet, he may have a broken nose,” said Jenkins. “He’s just now starting to come along as a young freshman and I’m praying that he’s going to be OK.”

But the loss of Williams didn’t slow the Corsairs down as forward Henry Anyanwu stepped in to fill his spot and guard Higgins seemed to hit every shot he took.

Yet Bakersfield didn’t give up the game that easily even if Higgins, Horton, and Williams were having career scoring nights as the Renegades came back to within six points at 57-51 with 13:54 remaining to play in the game.

It was then that Nwaba tipped in a long shot by Horton that bounced off the rim and this seemingly re-energized the Corsairs to go on a 11-4 run before the Renegades could recover.

The Corsairs held on to win the game four points shy of cracking a hundred points at 96-86.

“We’ve been going through those ups and downs all year,” said Jenkins. “That’s what goes along with a whole freshman team. We’re learning how to win games and we are just focusing on getting better every game.”

Higgins finished the night strong shooting 85% from the field making 12-14 baskets to lead the Corsairs with a career high 31 points.

Horton also had a big night shooting 63% from the field with a career high 26 points while Nwaba, who was double-teamed all afternoon, was limited to 16 points.

“David Nwaba was solid and Madison Higgins shot the heck out of the basketball,” said Jenkins. “And Keilan Horton was just solid for us.”

The Corsairs won away against LA Valley College 69-67 Wednesday night.

Next game for the Corsairs is home against Glendale Saturday at 1 p.m.

Check back at smmirror.com for the updated story.