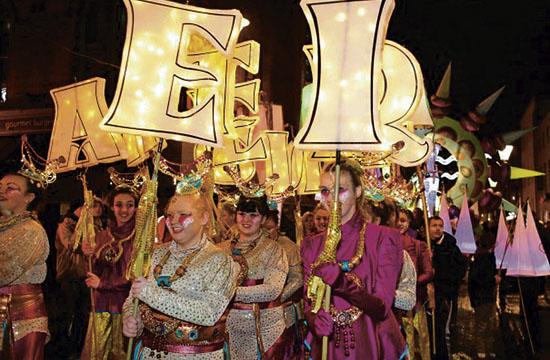 Fifty journalists from around the world including Belgium, Germany, India, Sweden, Denmark, South Africa, and the United States, arrived on a chilly Dublin day to celebrate the New Year’s Eve kick-off of “The Gathering,” an international outreach to hundreds of thousands of Irish people worldwide.

The invitation is extended not only to people of Irish decent, but also to people who love the Irish. All are welcome in villages, towns, and cities scattered throughout the Emerald Isle for the 2013 yearlong celebration, with over 2,500 unique events taking place that includes the gathering of clans, festivals, and concerts.

This was a double occasion as international dignitaries gathered in the courtyard of Dublin Castle to celebrate the 40th anniversary of the European Union and the beginning of Ireland’s six-month presidency of the EU. Following a number of speeches and the flag-raising ceremony, school children released 40 blue balloons signifying the EU’s anniversary. The Defense Forces Band played the Irish and EU anthems and the Methodist College Choir from Belfast sang “An Irish Blessing.”

New Year’s Eve was spectacular. Holding hand-made torches, approximately 1,500 men, women and children and 250 performers such as fire breathers, people on stilts, and dancers, gathered in Dublin’s College Green and delighted in participating in the Torch Lit Parade which wended it way past Trinity College, The Central Bank, and nearby Temple Bar and Grafton and O’Connell streets ending at St. Stephen’s Green for a brilliant fireworks display for which we thanked Mother Nature who suspended her blustery winds just in time.

Following the parade, an estimated 12,000 people peacefully assembled on the College Green for a rousing concert with performances by Imelda May, Bell X1, and Ham Sandwich.  With a spirited celebration such as this one, it is no wonder Dublin has been chosen the Number One city in which to bring in the New Year. Think about that when you make your New Year’s plans for 2013.

With all of 2013 designated as “The Gathering,” festivals abound and will vary in size and includes the St. Patrick’s Festival kicking off on March 14, 2013 culminating with “The People’s Parade on St. Patrick Day on March 17 in which up to 8,000 marchers from around the world will make their way through the history-packed streets of Dublin where they will not only pass historic landmarks, but those wonderful traditional music-filled pubs, some of which are noted as gathering places for some of Ireland’s most famous literati including:  George Bernard Shaw, Oliver Goldsmith, James Joyce, C.S. Lewis,  Bram Stocker, Jonathan Swift, Oscar Wilde, and of course, William Butler Yeats. If you would like to march in the parade with your special group, check it out and register here: www.stpatricksfestival.ie.

There are countless “Gathering” opportunities, too numerous to list, but several that sound like a hoot include the Irish Redhead Convention on August 24 where up to 1,000 redheads will converge in Crosshaven, County Cork for a weekend of craic (fun) during which there will be prizes for the champion carrot toss competition, best red beard, best longest hair, best family of redheads, and the most freckles. There will also be a chef’s cook off and in case you’re not a redhead, but would like to participate, you could win the “Best Wannabe Redhead” prize.  Other gatherings include gardening, twins, pilots, and just about any group you can think of. More information: www.discoverireland.com.

If you’re one of those people who growing up had trouble using scissors or any gadget designed for right-handed people, then The Left Hand Festival taking place August 9-13 is one “Gathering” that portends much wackiness. It will center in Mullingar, in County Westmeath that by some lucky coincidence means “town of the left hand mill.” There are an estimated six hundred million left-handed people in the world all of whom probably experienced bumping forks with the right-handed person sitting next to them, or felt frustration in trying to use a spiral notebook or in mastering tying shoelaces. You might say the left hand didn’t always know what that right hand sitting nearby was doing, but it always seemed to be in the way. So, this is a great opportunity to both commiserate and celebrate the wonderful world of lefties on International Left Handers Day on August 13.

No trip to Ireland would be complete without experiencing its rich literary heritage and towards that end there are several fabulous literary gatherings beginning with the Yeats Day Gathering on June 13 in Sligo. Artists from around the world are expected to attend to celebrate Irish writers. Yeats had a deep connection to County Slago from his childhood. Its coastline of many faces – sandy beaches, forests, rivers, and lakes such as Lough (lake) Gill, home of the Isle of Inisfree, served as a great source of inspiration throughout his adult life and the subject of one of his most famous poems. It will be held at Hamilton Gallery, 4 Castle Street, Sligo, County Sligo (+353.071.914.3686).

While in Slago, you must treat yourself to an evening with Damien Brennan and his gourmet chef wife Paula. They open Broc House, their lovely home overlooking the landscape that inspired Yeats, for an evening of Paula’s exquisitely prepared food interspersed between courses by Damien discussing the great poet’s life and reading excerpts from some of his works. This is truly a deliciously memorable evening (www.yeatssligoireland.com).

Thomas Moore’s famous poem, “The Last Rose of Summer” will be celebrated at The Last Rose of Summer Bicentenary Concert on June 22, 2013. Commemorating the 200th Anniversary of this poem, the “Gathering” will not only celebrate the poem’s publication, but also Mr. Moore’s life (Jenkinstown Park, Jenkinstown, Co. Kilkenny. Tickets: +353.87.251.5465).

On September 7 and 8, Galway will play host to another literary great in the Oscar Wilde Gathering that will pay tribute to the life and works of this great writer as well as exploring the strong connections between his writing and the west of Ireland.  His body of work is legion and includes the ever-popular “The Importance of Being Ernest,” and “The Picture of Dorian Gray.” The phrase, “You should see the painting in my cellar,” crept into pop lexicon and is often used when someone is complimented for aging well (thegatheringireland.com).

There are gatherings galore including a call to golfers who might want to tee off at the Five Star Hotel and Golf Resort Adare Manor, named “Ireland’s No. 1 Parkland Course” by Golf Digest Ireland for the seventh consecutive year. A course favored by golfers from around the world, the 18-hole course is intermingled between lush mature trees and a 14-acre lake anchoring the front nine holds, and The River Maigue that wanders throughout the artistically manicured greens. This exquisite property that has truly mastered the art of hospitality, is in the center of Adare Village in County Limerick and is surrounded by medieval ruins and a history that goes back centuries (Main Street Adare, Co. Limerick, Ireland, +353.61.605.200, www.adaremanor.com/index.html).

Once you experience enchanting Ireland, you will understand why for the second year in a row it has been voted “the destination with the highest client satisfaction.” This honor was bestowed at an awards ceremony in Beverly Hills sponsored by TravelAge West magazine, with Ireland winning out over Great Britain, France, Italy, and Greece. Also, good news for travelers is the temporary lower VAT rate of 9 percent that is effective until the end of 2013 and applies under the umbrella of the tourism industry encompassing hotels, restaurants, and special attractions.

So with travel season rapidly closing in, this is the time to put Ireland at the top of your bucket list.  If you need help in planning a trip, contact your travel agent or www.discoverireland.com who will be happy to orchestrate the most appropriate vacation adventure for you.