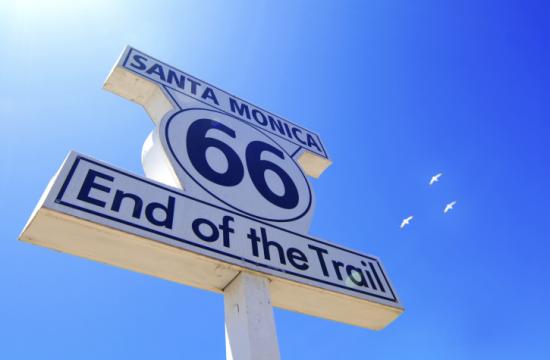 Dan Rice, past president of the California Historic Route 66 Association, will lead the free discussion at 1:30 pm.

Intimately familiar with the route, Rice has traveled the highway 27 times. He is current national vice president of the Route 66 Alliance; he also hosts the upcoming TV series, “Road Scholar.” Rice’s shop, “66 – to – Cali” may be found on the Santa Monica Pier.

This storied highway, from Chicago to Los Angeles, was completed in 1926 and extended to Santa Monica in 1936.

“There has been some dispute about where in Santa Monica the route ended,” said Carol Lemlein, Conservancy president. “Several locations lay claim to being the terminus; this lecture will unwrap the mystery.”

Route 66 was glorified during the Depression as the path to hope, opportunity, and a new life.

The lecture offers a virtual tour of “The Mother Road,” so named by John Steinbeck in his book “The Grapes of Wrath,” which described the westward flight of migrants after the Dust Bowl of the 1930s.

In the 1950s it became the main highway for vacationers heading to Los Angeles.

Rice will discuss the background of America’s Main Street, and how everyone from real life characters like Jack Kerouac and Al Capone to fictional ones like Forrest Gump “got their kicks on Route 66.”

From the outset, public road planners intended it to connect the main streets of rural and urban communities along its course as most small towns then had no prior access to a major national thoroughfare.

In 1985 it was bypassed by the new Interstate Highway System and was officially removed. Many portions of the original road are now National Scenic Byways under the name “Historic Route 66.”

The lecture is free but reservations are advised at www.smconservancy.org or by calling and leaving a message at 310.496.3146.