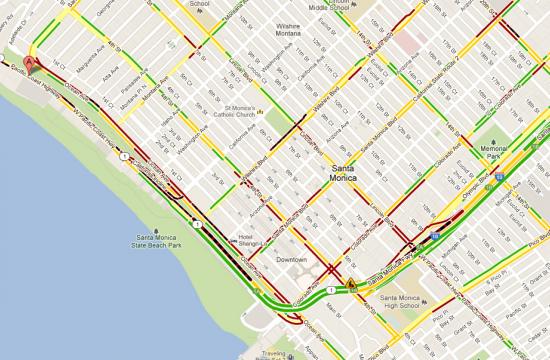 A car making a suspected right hand turn out of a country club at 268 Pacific Coast Highway in Santa Monica was struck at 12:22 pm Thursday afternoon by a vehicle traveling southbound on the PCH, which snarled traffic in downtown Santa Monica and forced major diversions.

All 10 Freeway westbound traffic was diverted to exit at the 4th/5th Street off ramp in downtown Santa Monica as both northbound PCH lanes and one southbound PCH lane were closed until about 2:45 pm.

SMPD Sgt. Richard Lewis said the accident only involved two vehicles. He said one of the parties was in critical condition; the other party has moderate to serious injuries.

“Both were transported to a local trauma center,” Lewis said.

Lewis said drugs and alcohol are not suspected from the initial investigation, but that’s subject to change.