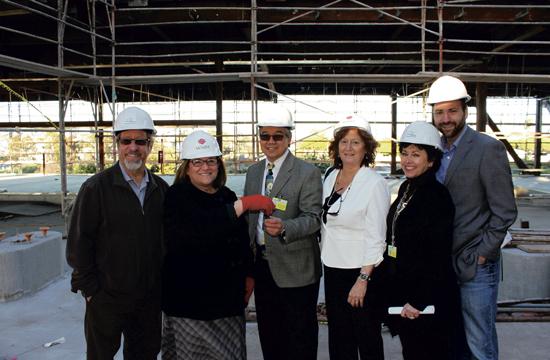 Although the last piece of steel was put into place last December for Santa Monica High School’s new Science and Technology Building, the school district held a topping out ceremony Monday afternoon to recognize the milestone.

The building is expected to be operational in winter 2013, with a bordering softball field and additional parking expected to be complete in summer 2014.

“That’s the equivalent of 3800 pieces of steel, which is about 16 miles of linear feet of construction steel,” Sam said. “If you put the structural steel side-by-side starting from the Santa Monica Pier you could make it all the way down to Los Angeles City Hall.”

Sam said approximately 200 tons of the steel was derived from recycled content, which saved 313.5 tons of iron ore, 104.5 tons of coal, and about 13 million gallons of water.

“Depending on which side of the fence you are standing, we’re basically in Centennial Quad or Centennial Plaza, which will be a nicely landscaped multiple seating area,” Nadalet said. “It will feature a lot of curves, a lot of radiuses, and it will be a very pleasant environment to meet and everything.”

He said the building was split into a north and south half.

He said the north half would primarily be classrooms including a new computer lab, two special education classrooms, an auto shop classroom, plus a five bay auto shop, and 18 house classrooms.

Meanwhile, the south half of the building would comprise of 15 computer labs.

“We’re creating a new entrance to the campus, but it’s the first new construction on this campus in 40 years at least,” Meister said. “That’s huge for this community and it’s a huge message to the kids who are now in pre-school, elementary, and middle school who are going to be coming to Santa Monica High.”

Rebecca Binder, of R.L. Binder FAIA Architects, was excited her vision was finally coming together for the project.

She said unusual and unexpected outdoor spaces would compliment all the classrooms.

“We’re standing in an outdoor atrium, so there is circulation that leads into the classrooms on these two levels as well as the administration offices that are all off this courtyard,” Binder said on a tour of the building . “You get a feeling of community.”

She said she set out with the idea to create an exciting environment in which the building becomes one of the learning tools.

“This is a Science and Technology Building and the students will get to see the frame and steel exposed and potentially they will start to ask questions as to how a structure stands, maybe make some young architects and engineers.”

Outdoor improvements include the reconfiguration of the north parking lot and a 125-space bicycle parking area.

The softball field will be relocated adjacent to the new building.

A new main campus entrance will be constructed at Seventh Street and Michigan Avenue.

The Centennial Plaza, which will be constructed in conjunction with the new building, will create a gathering space for students during lunch, recess hours, and school events.

The construction of the Science and Technology Building at Samohi is the largest project in the Measure BB program.