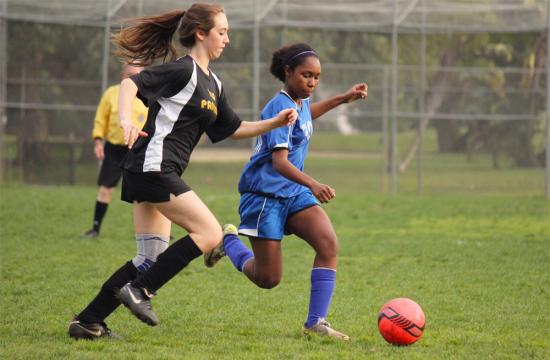 Pacifica Christian (11-0) gave Yeshiva a good drubbing in soccer beating the Panthers 12-0 at Marine Park Thursday afternoon with the Seawolves scoring all 12 of their goals during the first half and securing their claim as undisputed champions to the Liberty League crown.

Midfielders Emma Miller and Sylvania Santos both scored one goal a piece.

Seawolves Head Coach Guido Hajenius believed that the Panthers did well as they only had nine players to play the soccer game.

“They only had nine players so we put in nine players against them,” said Hajenius.  “With our starting team, we started scoring right away.  It’s just one of those things that when we are up by that much, we just have to work on our fundamentals like passing and finishing.”

Typically, a high school girls soccer game is played with 11 players and Pacifica Christian could have opted to play all 11 of their players against a nine player team but decided to be fair about it and only played nine players at a time.

“We knew we were the stronger team in league so when they came out with nine players, we definitely knew we wanted to play with nine,” said Hajenius.

During the 2012-2013 season, Pacifica Christian girls soccer has gone undefeated at 8-0 and will advance into the CIF Southern Section Playoffs as the number one seed of the Liberty League.

First round playoff game will be Thursday and will be hosted by Pacifica Christian with the time and location TBA.

CIF Southern Section Playoff brackets to be released Monday so check back at smmirror.com for updates.