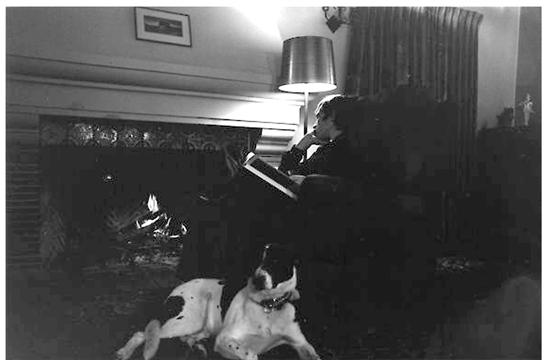 Patrick Painter Inc. currently has an exhibition of works by Bas Jan Ader called “The Studies” at Bergamot Station that will be on display through March 9.

This exhibition features never-before-displayed vintage photographic studies of some of Jan Ader’s most influential works.

Ader (1942-1975) was a Dutch born California-based artist who mysteriously vanished in 1975 when he set sail on what was to be the smallest sailboat ever to navigate the Atlantic.

He was in the process of completing the third part of the project “In Search of the Miraculous.” Now, more than 30 years after his disappearance at sea, he is more influential than ever before.

In this exhibition, the gallery revisits one of the initial works of that project by displaying the unseen vintage studies for “In Search of the Miraculous” (One Night in Los Angeles). This series was first exhibited in 1975 at the Claire Copley Gallery in Los Angeles and consisted of 18 photographs depicting Ader walking from night until dawn, beginning in the Hollywood Hills ending at the Pacific Coast.

The studies grasp the same visual imagery as those photographs from the original series, but these allow the viewer to delve deeper into the Ader’s photographic romanticism.

In, “I’m Too Sad to Tell You,” Ader’s most poignant and enigmatic work, the artist reveals himself in the act of crying. This work was documented through both photographs and video and was performed in 1970 and 1971. In this exhibition, we take a look at vintage studies from the two performances. The performance was first photographed and printed on postcards and mailed to Ader’s closest friends with the inscription “I’m too sad to tell you” on the image. The studies display candid shots from one Ader’s most personal of works.

Ader graduated from the Otis College of Art and Design in 1965 with a BFA, and from the Claremont Graduate School in 1967.

After graduating, Ader taught at many institutions, including Mount San Antonio College and the University of California, Irvine.

Ader’s work is also currently on display at the Museo d’Arte Moderna di Bologna, Italy and will be displayed at the Galerie der Gegenwart, Hamburg, Tim Van Leere Gallery, Antwerp and the Martin Klosterfede Gallery, Berlin this summer.

Public viewing hours are Tuesday through Saturday from 11am to 6pm. The gallery is located at 2525 Michigan Ave. B2 (Bergamot Station), Santa Monica.