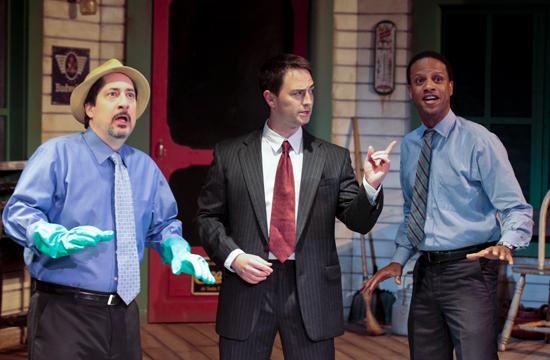 The show opens this Friday, Feb. 8 and will run Fridays and Saturdays at 8 p.m. and Sundays at 2 p.m. through March 30.

This satirical musical follows a charming new preacher and his bombshell sidekick, rescued from the stripper pole at the Innuendo Lounge, but can they save the day as their town is about to be outsourced?

The play is an adaptation of the book/music created by Tom Sage, Bill Robertson, and Cliff Wagner, who have collaborated with director Dan Bonnell to create this production.

Wagner said growing up in the Bible Belt, he had folks pushing him to do what they said would bring him the salvation they thought he needed.

“After being a contestant on the reality TV show ‘America’s Next Great Band’ I got to experience a whole different set of people pushing me to do what they said would bring me the momentary success that they thought I needed,” he said. “Tom, Bill, and I have tried to create a story that shows these very different forces acting on an innocent town whose past suffering has made them easy prey. Through music and comedy, we ask questions about the best and the worst in all of this.”

Michael Myers, who is managing director of the theatre, said he was thrilled for the world premiere of the show.

“From the moment we saw the first reading of this show last January, we have been moving full steam ahead with mounting it,” Myers said. “It’s so wonderful and we knew that we had to produce this before someone else did.”

Whether you are a theater fan or not, Myers said “Paradise” would entertain all theatregoers.

“The show has something for everyone and it’s really worth seeing,” he said. “It’s a very exciting time in Santa Monica for the performing arts. There is a lot of great work being done within the eight square miles that makes up Santa Monica so support live theater. You won’t be sorry.”

John Ruskin, head of the Ruskin School and Theater Group, said everyone who sees a show at the venue comes back for more.

“I would say if you love great theatre, great actors, and great performances, you will love coming here,” Ruskin said. “We have gathered some of the most talented artists in our community here and we are producing some of the finest theatre around.”