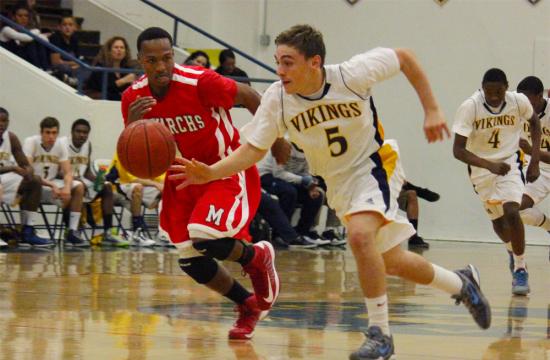 Santa Monica High School (19-6) made short work of Morningside (10-15) destroying the Monarchs off the ball and posting a blow out score of 79-49 at home Tuesday night to make up for a shocking loss to Beverly Hills 52-50 away on Friday night.

Vikings Basketball Head Coach James Hecht thought that the difference between the two games was that the Vikings tried harder in the game against the Monarchs then against the Normans.

“They played great defense throughout the game, I thought,” said Hecht. “(They) chased the ball. They pursued. They made multiple efforts and I think that’s what we missed Friday.”

The score was 17-7 by the end of the first quarter and it was apparent that the Vikings had the upper hand badgering Morningside, counting numerous steals, and refusing to allow any sense of tempo to be established by the Monarchs.

By the end of the second quarter, the score was a lopsided 36-13.

The second half was more of the same beating and the Morningside defenders seemed to give up allowing layup after layup to be scored by the gamut of Vikings who participated in the slaughter.

“I told the guys that ‘whatever anger or disappointment you feel, you’ve got to channel that and funnel that…and take it out on whomever you’re playing,” said Hecht. “I’m a coach. I’m always going to try to get more out of these guys.”

Next game for the Vikings is the last game of the regular league season against Hawthorne at home Thursday at 7:30 p.m.