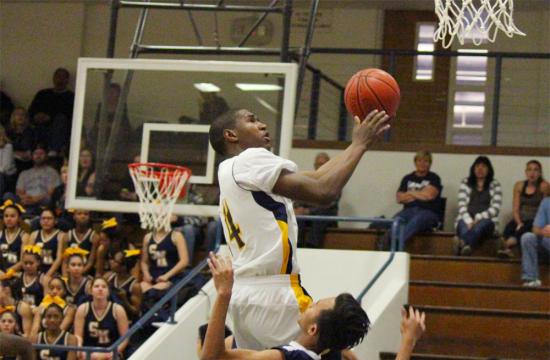 The Santa Monica High School(21-6) basketball team defeated Alhambra (13-12) soundly 75-32 showcasing why the Vikings are heavy favorites as the number two seed in the CIF Southern Section Division 1A at home Friday night.

“We’ve been playing that way all year and it was effective enough tonight,” said Hecht. “It gave us a cushion to maintain our lead and give us the opportunity to rest some of our guys and get ready for the next game.”

Samohi guard Jordan Matthews stepped up his game on defense against the Moors.

“I know my team needs me to play great defense, but I just wanted to hone in on defense today so I could just improve every game,” said Matthews. “Our coaches always stress be as intense on defense as you are on offense.”

Samohi controlled the game from the start and the Vikings up-tempo offense and full court press defense was too overwhelming for an undersized and overmatched Moors team.

The Vikings drove the ball to the basket going on a 9-0 run in the first quarter play after play and were rewarded for their aggressiveness scoring easy lay-ups.

Mathews, who scored 13 of his 17 points in the first half dominated the physical inside game against the Moors and contributed strongly to the Vikings victory.

The Vikings forced 15 turnovers shutting down Alhambra to a staggering 18 first half points and keeping the Moors to single digit scoring in three of the four quarters.

The Vikings held a twenty point lead by the end of the first quarter.

At the end of the first half the score was 44-18 and it was clear the Vikings had no plans of backing off on defense continually forcing the Moors to take one bad jump shot after another.

The Vikings defeated the Burbank Bulldogs (16-12) away 58-46 in the second round of the CIF Southern Section playoffs Tuesday night.

Next game for Santa Monica is against Aliso Niguel in the CIF Quarterfinals away Friday at 7 p.m.