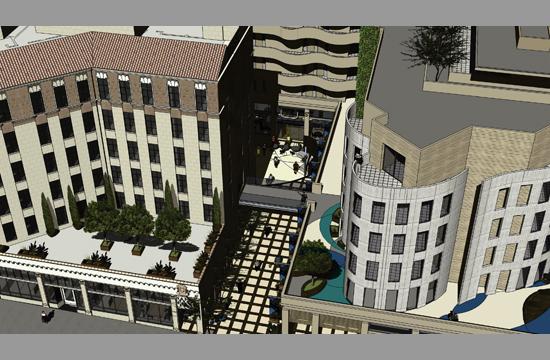 Santa Monica City Council members were presented at their Jan. 22 meeting with a status update of 21 past, present, and future projects, with City staff reporting the dais roughly half of the developments within Santa Monica are in full compliance with its respective development agreements (DA).

Nine other projects with DAs are either under construction or have yet to begin work. One project, a four-story, 56-foot tall commercial development at 1733 Ocean Avenue, is the only development not yet compliant with its DA. According to City staff, the developer needs to resolve with City Hall the issue of on-site parking use.

Last year, there were 20 developments subject to DA review. In the past 12 months, a 21st DA was added: the property at 710 Wilshire Boulevard. According to City Hall, that “project has not yet advanced to the building permit application phase.”

According to City staff, DA compliance is not yet required for the four projects currently awaiting workers to start using shovels and jackhammers.

Five projects are already under construction.

All 21 projects have standing agreements with City Hall. With each agreement, the developer is granted an exemption to various zoning ordinances if they agree to provide certain community benefits in return.

The status of the 21 projects was part of an annual review by the council “to determine good faith compliance with the terms and conditions of the Agreements.”

“Each Development Agreement contains unique time frames, obligations, and requirements,” a staff report to council members stated. “The obligations can be one-time or ongoing; some are fees, some are actual physical improvements, and some are ongoing services.”

The remaining six projects that have yet to commence construction include Colorado Creative Studios (Lionsgate), 702 Arizona Avenue, 401 Broadway, and 1548 Sixth Street.

Five DAs are currently in the early stages of being created, according to staff, including the second phase of the Ocean Park Redevelopment Area, two properties on Santa Monica Boulevard, a project on Fourth Street, and another development on California Avenue.

Staff presented each of the 21 projects, outlining in detail the purpose of the DA, when the agreement was entered into, and, where relevant, the development’s status of compliance.

Ten of the DAs have a Transportation Demand Management (TDM) requirement, each providing bicycle parking or amenities. The Colorado Center and Santa Monica’s Catholic Community were the only two projects with TDM requirements that did not have to pay City Hall a transportation fee.

The Saint John’s Health Center DA required the developer to provide 18-month shuttle operation between the property and the Expo Line.

“All fees associated with constructed Development Agreements have been paid to date,” City staff stated.

Staff and the council have been reviewing DAs since 1982, when an ordinance was enacted requiring developers to consider providing community benefits in exchange for exemptions to zoning ordinance that, for example, restrict height.

The next DA compliance review will be in January 2014.