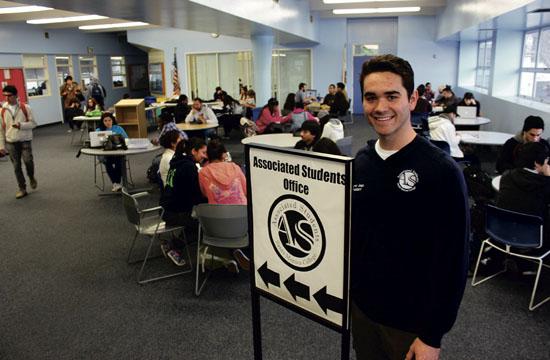 When Santa Monica College announced in November it would reinstate its previously canceled winter program, there was a dedicated group of students who had been working behind the scenes, culminating in a $200,000 contribution from the student government towards the $1.2 million instructional cost to run the six-week program.

Associated Students President Parker Jean led the efforts. He will be formally recognized March 5 at the next SMC Board of Trustees meeting.

While the Nov. 6 passage of Proposition 30 (temporary tax to fund education) gained most of the attention for being the savior of the winter program, there was little to no accolade for the student government.

Jean said he and his 14-member Associated Students board decided to take matters into their own hands after SMC’s Board of Trustees’ unanimously voted Sept. 6, 2012 to cease winter classes due to budget cuts.

Jean said the SMC Board of Trustees and SMC President Dr. Chui Tsang stood firm on their decision to cancel winter classes for about two months, adding they continually said winter classes would not return, regardless of whether Prop. 30 passed or failed on Nov. 6.

“It was discouraging and sounded like there was no way we were going to have a winter session,” Jean said. “We, the students-at-large, were rallying for Prop. 30 and it was a success, which was critical. However, there was a lot going on behind the scenes to revive classes and the winter session – and that is what I feel what was left out when it was finally announced that winter classes would return.”

When the SMC Board of Trustees and SMC administration remained tight-lipped after Prop. 30 passed on whether the winter program would return, the SMC District Planning and Advisory Council (a body comprised of representatives of faculty members, classified staff, Associated Students, and Administration/Management Association who are responsible for making recommendations to the Superintendent/ President) met on Nov. 14 to discuss the possibility of contributing money out of the Associated Students budget to save the winter program.

Jean said a recommendation was voted on to contribute $200,000 – approximately a quarter of the Associated Students annual budget – to help with the reinstatement of the winter program.

Jean said Dr. Tsang accepted the $200,000 contribution and the official announcement of the reinstatement of winter classes was made on Nov. 20.

Dr. Tsang said the restoration of winter classes was made possible by the passage of Proposition 30 in November 2012 and “the explicit promise that the next five years of State funding would be stable with a modest improvement available each year.”

Dr. Tsang said the rest of the money to run the winter classes – about $1 million – came from the general fund reserves of the College.

He said a certificate of appreciation would be presented to Associated Students President Parker Jean on March 5.

“This is the first board meeting held since the return of most students to the campus for the start of the spring semester, so we are hopeful that many students will be able to attend to receive the thanks from the Board and the administration,” he said.

The Associated Students budget is generated from about two-thirds of SMC students who elect to pay a $19.50 Associated Students fee each semester, which gives them benefits such as unlimited use on the Big Blue Bus network, a certain amount of free printing on campus, access to clubs, and discounts at local businesses.

Of the $19.50 fee, about a third goes into several unrestricted funds that the student government can choose how to spend.