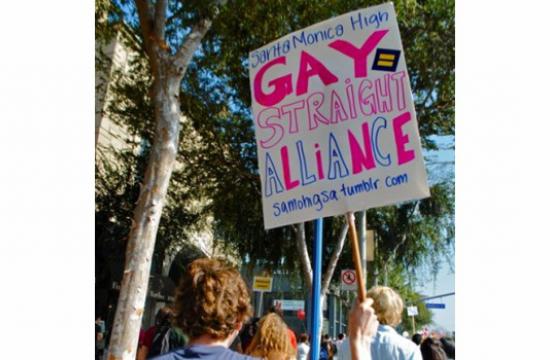 A group of just six members from anti-gay group Westboro Baptist Church were met by several hundred members of the Santa Monica High School community this morning who stole the spotlight from the controversial group.

Samohi students and their supporters came out in numbers after the Kansas-based group announced earlier this month they would picket outside Samohi to “tell students the Gospel truth which their parents, teachers and preachers try desperately to hide from them.”

Santa Monica Police Department Sgt. Richard Lewis said 25 officers were assigned to patrol the high school this morning at 7 am, but there were no incidents during the peaceful protest.

Meanwhile, the students and their supporters waved rainbow flags and held their own signs that supported gay marriage. One poster read “God hates people who say they know who god hates.”