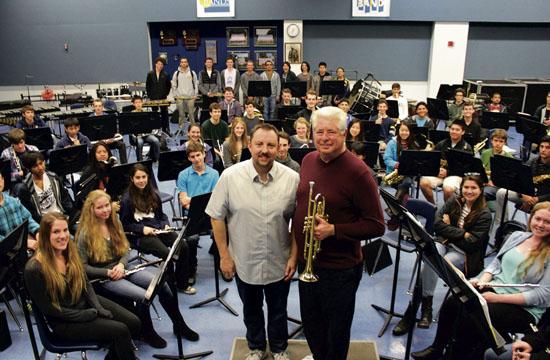 The Santa Monica High School Wind Ensemble has been busy fine-tuning its pieces in the lead-up to its gala benefit concert this Wednesday, Feb. 27 at The Broad Stage that is hoping to raise funds for the band’s first tour in seven years.

Several months ago, the Samohi Wind Ensemble was invited to perform in the Chicago International Music Festival at historic Chicago Symphony Hall, which is being held next month.

Traditionally, high school bands are generally relegated to daytime performance slots, but after representatives of the festival heard the mature sound of the group, the Wind Ensemble was offered an evening performance time slot alongside college bands.

In addition, Chris Martin, Principal Trumpet for the Chicago Symphony Orchestra, will perform a concerto with the Samohi Wind Ensemble.

Samohi Director of Bands Kevin McKeown said the students are particularly excited, as this is the orchestra that performs the score in Steven Spielberg’s “Lincoln” and it is Martin whose solos are heard throughout the film.

The students will also have the opportunity to meet and work with the renowned music educator Dr. Mallory Thompson of Northwestern University (she is only the third Band Director in the history of the school).

In order to close the budget gap for some of the school’s scholarship students, the Samohi Wind Ensemble will be performing a gala benefit concert at 7 pm at The Broad Stage on Wednesday with guest soloist David Searfoss.

McKeown said he would love for the entire community to come out and support these talented student ambassadors as they get ready to travel to the other end of Route 66.

He said this Wednesday’s benefit concert would mark the Wind Ensemble’s first performance at The Broad Stage.

“I wanted to have a fundraiser that highlighted one of our great concert halls, and The Broad Stage is definitely a gem,” McKeown said. “What helped facilitate this was the fact that I am the conductor of the SMC Wind Ensemble as well, so in essence, thanks to the okay from the school and The Broad Stage, my group at the college is hosting our high school. This helps since this benefit concert was created during a late a-ha moment while figuring out how to raise a lot of money for our students in need. It needed to be something more than the usual bake sale approach, so I am greatly appreciative of everyone’s help making it a reality.”

McKeown said the Samohi Wind Ensemble was chosen to participate based on its high skill level and because it represents a district that values music as part of the curriculum.

“The district begins music instruction from third grade through high school,” he said. “This is exceptional, and is used as a model for other districts trying to maintain or strengthen their arts programs.”

He said the students have started to understand the importance of the trip in the past month.

“They are so busy with school, sports, outside commitments, that they know how to prioritize things well,” he said. “They have improved a lot over the past month, and are starting to show that in their expressive playing. We want to get all the hard work done before we leave so that when we are there we can truly focus on the enjoyment of performing with Mr. Martin and learning from Dr. Thompson of Northwestern University.”

Among the students traveling to Chicago are senior Eli Brown (trumpet) and junior Ryan Roberts (oboe), who were recently chosen to participate in the Inaugural National Youth Orchestra of the United States of America.

McKeown said their achievement shows how its students strive for greater things.

“It puts Santa Monica on the map, as having two fine student musicians from a public school is rare to say the least, but this is what they want to do with their lives,” he said. “What I am most proud of with both of them is how they remain humble with all the accolades. They embody the character that we hope all students will strive for.”

McKeown said he was proud of all the students, the school district, and the supportive community.

“I know it’s cliché, but it’s the truth,” he said. “I have the experience of knowing the program through the lens of a student, graduating in 1992, and seeing its tremendous growth over the past 20 years. This trip is a bi-product of the commitments made by the students and families over the years, beginning with the parents who took their kid to their first lesson, the mastery of the circle of fifths by the students in middle school, and the auditioning and acceptance into the Wind Ensemble at Samohi. Now is the time to celebrate, starting with our benefit concert on Wednesday at The Broad Stage.”

For more information or to purchase tickets, visit www.samohiband.org.