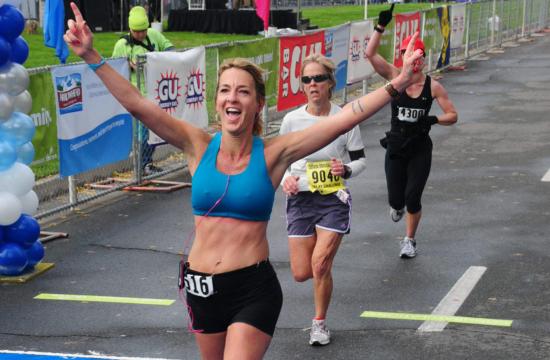 Ultra-marathoner Julie Weiss, a long distance runner in her forties and mother of two, is extremely passionate about finding a cure for pancreatic cancer and has undertaken a mission to complete 52 marathons in 52 weeks culminating in the 26.2 mile LA Marathon on March 17.

Almost a year later and still healthy, Weiss has five more marathons to complete before she reaches her goal.

The 2013 LA Marathon will be the last marathon on Weiss’ year-long journey to complete 52 marathons in order to raise money for the Pancreatic Cancer Action Network in honor of her father, who died from the disease in 2010.

“My father who is my greatest fan and most challenging critic passed away from Pancreatic Cancer in 2010,” said Weiss.  “There was nothing like the joy he got when he saw me run.  After every marathon I would call him or go see him and he would be so excited at what I had just done and he would stand up wherever he was, like a crowded room at a party, and tell everyone that I just ran a marathon.”

Weiss has participated in en masse marathons around the nation the last couple of years including the Boston Marathon, the New York Marathon, and the Chicago Marathon.

Weiss has also been featured in Runners World Magazine representing the quintessence of a women who is indefatigable, a paragon of determination and persistence.

Determination to overcome happens to be a hallmark of Weiss’ personality.

Weiss made a promise to herself and her father, who had just been diagnosed with stage four pancreatic cancer and given three months to live, to qualify.

Weiss’ father encouraged her to run the Sacramento marathon while he was dying of pancreatic cancer.

“My father, even when he was sick, encouraged me to keep training and keep going to work,” said Weiss.  “Don’t change anything on account of me.”

Weiss kept training by running around her neighborhood and back to her father’s bedside and succeeded in qualifying for the Boston Marathon Dec. 5, 2010 a week after her father passed away.

“It was bittersweet and the way I wanted, but in a way my dad was there,” said Weiss.  “He was the wind on my back, he had the best seat in the house in my heart.”

Even with her success, not everything in Weiss’ running world has gone according to the plan running marathons during the past year.

“I have had a few marathons recently where I have had to deal with flight delays into Mississippi which resulted in only three hours of sleep before the marathon,” said Weiss. “And then another very early wake up call at the Disneyworld Marathon with only two hours of sleep but I am still trucking along. I have coffee and all the angels I am running for to keep me going.”

Marathon cancellations have also been a problem but that didn’t stop Weiss from finding a replacement marathon.

“There was some drama surrounding the cancellation of the New York marathon that was cancelled just one hour after we landed,” said Weiss. “I had to double back and get the first flight back to California to get a marathon in that weekend in Santa Clarita, but I did it.”

Weiss has also had to deal with sickness but that didn’t stop her from running in a marathon.

“I had a severe flu when I ran the California International Marathon in Sacramento earlier in December,” said Weiss. “I had 105 fever on a Tuesday but miraculously it was gone by race day.  It’s like I have the angels looking out for me.”

One marathon that Weiss thinks will present a challenge for her is the upcoming Catalina Marathon.

“The Catalina marathon will be a challenge, one week before the LA Marathon,” said Weiss. “It is a very hilly trail race.”

Weiss looks forward to the upcoming LA Marathon which will be her last, a 26.2 mile race, that will end a year-long journey running around the nation and chronicling her determination to overcome under the banner of a greater cause; to keep a promise to her father to keep running and raise awareness and money to find a cure for pancreatic cancer.

For more information about pancreatic cancer and how to get involved visit www.marathongoddess.com or go to the Pancreatic Cancer Action Network website at www.pancan.org