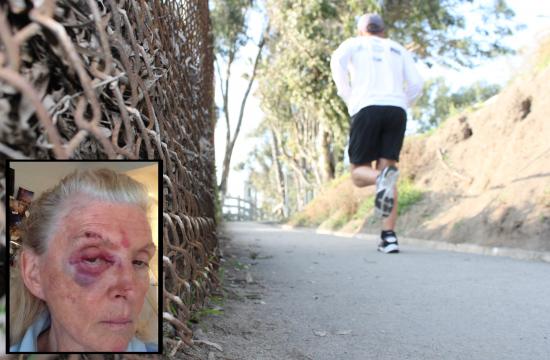 On Monday, the 69-year-old was walking along the asphalt path at the end of Idaho Avenue that runs down to a PCH overpass at about 7:30am, when a group of six fitness class runners began laps up and down the narrow path.

She said she heard a runner approaching from behind her, and with another runner about to pass her from the front, she stepped out of the way too quickly when her pants caught the chain link fence that curls outwards toward the path, causing her to take a heavy fall.

“I landed full force on my face and my left knee,” Keeling said. “My hands never got a chance to catch myself. I got knocked for a loop. I didn’t pass out, but I was bleeding and I was disorientated.”

She said the two runners stopped and helped her back to the park area where the fitness trainer was coordinating the rest of his group.

She said she told the trainer that it wasn’t safe to have so many runners using the path for training because it was too narrow.

“I told him older people get confused when people are coming at them like that in both directions,” she said. “He said it wasn’t their fault that I fell. On some level he’s right, it really wasn’t their fault because they didn’t bump me, but it was kind of a like a perfect storm of events that came together for it to happen.”

Keeling said it was about time the City of Santa Monica finally prohibited trainers from having large fitness groups at Palisades Park, so incidents such as her own don’t happen to anyone else.

She said she was able to drive herself to the UCLA emergency room where she was treated for her cuts and bruises.

“Luckily the x-rays showed there were no broken bones, but my face looks like someone hit me with a baseball bat,” she said. “I’m all bruised and black and blue. My neck and my knee are what the doctors are most concerned about. They think I might have deep tissue damage.”

She said she decided to speak with The Mirror about the incident to make the community – and Council members who are expected to vote on the issue in the coming months – sit up and pay attention to what’s going on at the park.

“I’m perfectly willing to make a dreadful example of myself,” she said. “If this had happened to my friend who is 82 and weighs about 70 pounds, she would have broken something or even been killed. I’m a strong woman at 5’9” and weigh about 140 pounds. I fared well, but compared to what could have happened to someone else, it could have been a lot worse.”

Keeling, who spent five decades as a career personal trainer who now trains senior citizens, said she had to cancel all of her classes this week while she recovered in bed.

“Since I work with older people it’s one of the reasons I’m so adamant about getting this whole situation handled, because I fully understand the comprised situation that seniors are in because I work with them all the time.”

She said the solution to the park’s problem was simple.

“They need to get the big groups out,” she said. “They need to have one-on-one or one-on-two and no equipment. If there was a trainer with just two people running up and down the path on Monday, this wouldn’t have happened to me.”

Karen Ginsberg, Director of Santa Monica’s Community and Cultural Services Department, said the City had been studying options to create a permit system to regulate commercial fitness businesses operating in all City parks and at the beach, not just Palisades Park.

However, she said safety was not among the top reasons why the City began exploring the permit plan.

“We had been receiving lots of concerns from neighbors about a variety of issues associated with the trainers,” Ginsberg said. “It included everything from instructors conducting their commercial businesses and profiting off public land, they may or may not have insurance, that these classes were damaging the turf and amenities, that they take over sections of the park that make the space unavailable for others to use, and noise concerns of yelling, whistles, and chanting early in the morning.”

Ginsberg said the City conducted a one-week survey at Palisades Park from Oct. 24 to 30, 2012 between the hours of 6am and 7pm to determine how many trainers used the area.

“During that seven day period, there were 73 group classes, classes with more than two participants, and 74 private and semi-private classes, meaning one or two participants,” she said. “The highest concentration occurred between San Vicente and Idaho Avenue. About 75 percent of the group classes happened between 7am and 1pm. The survey found 82 percent of the private and semi-private classes happened at the same time.”

“During the testimony that was given at the Recreation and Parks Commission (held Nov. 15, 2012), there were several trainers or participants who indicated that up to 30 people may take a class,” she said. “They said most used some type of equipment, yoga mats, hand weights, bench presses, kettle balls, cones, large ropes, other items like chalk and white boards, boom boxes, signage, and they were attaching equipment to park amenities.”

Ginsberg said a backlog of Council agenda items was the reason why the issue hadn’t yet made it to City Hall for deliberation despite the November Recreation and Parks Commission staff report that suggested it would be discussed as early as last month.

“Only so many things can go on each agenda,” she said. “It’s a juggling act.”