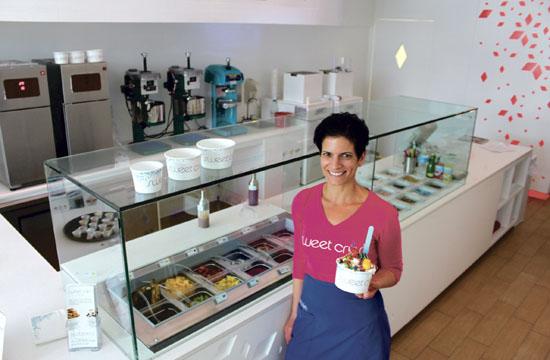 Among Santa Monica resident Yael Lustmann’s friends, she has become known as the “Ice Queen.” Next weekend, she will use her sweet tooth creating powers to serve up delicious desserts to Hollywood’s elite at the 2013 Governors Ball, the Academy’s official post-Oscar celebration.

As founder of Sweet Crush at 11753 San Vicente Boulevard in Brentwood that opened late last summer, the mother of three daughters has been working to create two special desserts for the A-list event.

Sweet Crush is an inventive new take on Asian-inspired shaved ice infused with flavors like pomegranate, strawberry lemonade, and pink guava and topped with fresh fruits, candy, and drizzles including chocolate, caramel, mango and strawberry to name a few.

Lustmann said her three daughters, aged 4, 6, and 8, loved shaved ice so much that she began to research the possibility of starting her own shaved ice shop.

During her research, she found Hawaiian shaved ice with syrup was the most common, but wondered why nobody had created Asian-inspired shaved ice desserts.

After coming up with a business model and buying ice shaving machines, sourcing fruit vendors, and signing a lease on the San Vicente location, she opened nine months after the idea was born.

She said the creations are healthy, low calorie alternative to frozen desserts that contain only natural ingredients with no artificial colors, flavors, or preservatives.

There are the options of milk-based and vegan ice shaves.

Among the most popular milk-based flavors are chocolate, espresso, coconut, and peanut butter. On the vegan menu, strawberry lemonade, passion fruit, raspberry, and lycee are all crowd pleasers.

“People that come in and try it for the first time love it,” Lustmann said. “They say when they have frozen yogurt most of the flavors taste the same. They say that when they come here, whatever you get is actually what you taste. They can tell you, without me telling them, what the flavor is.”

On Nov. 17, Lustmann participated in the Just Desserts Festival at The Art Institute of California in Santa Monica, which led to her upcoming involvement at the Governors Ball.

She met Wolfgang Puck’s executive pastry chef who worked at Spago, who fell in love with the shaved ice desserts.

Lustmann was invited to take part in an event at Spago late last year. Soon after that event, Wolfgang Puck invited her to create desserts at the dessert table with him at the Governors Ball.

One of the desserts she will create will be a chocolate soufflé with a chocolate disc and fresco shaved ice chocolate on top. The vegan option she will serve will be frozen grapes with blood orange shaved ice on it.

She said she was excited for the opportunity, but a little anxious at the same time.

“Here at the shop we shave into large cups and we do the samples too,” she said. “But at the Oscars, the chocolate disc is smaller than the size of your palm and it can’t get messy. It’s the Oscars. Nobody wants to get blood orange on their beautiful dresses. It could get stressful because it has to fit on the disc and not fall.”

Back at the store, Sweet Crush is a winter wonderland with a white wall of laser-perforated snowflakes, back-lit by a kaleidoscope of changing colors – created by design company 64 North.

Lustmann said she has Ikea to thank for the design idea.

“I wanted to do walls with perforations and the changing colored lights behind being the only design elements,” she said. “The whole changing lights idea came about when I moved to LA from New York. When I went to Ikea, like everyone does, I bought this light bulb that changes color. When you pass by my house at night, you see my kids’ room looking like a disco because it’s purple, pink, blue – and that’s their night-light. I then set out to create store with the changing lights idea. It’s controlled by a computer, so I can set any sequence or color I like.”