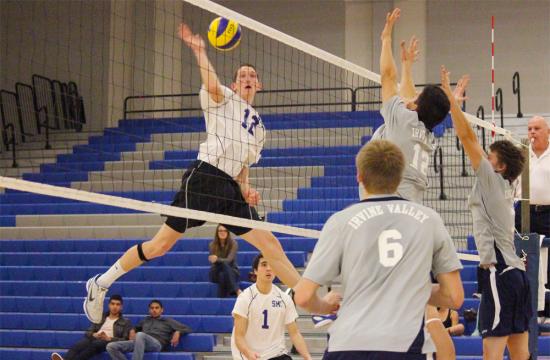 SMC Volleyball Head Coach John Mayer thought that even though the Corsairs lost to the Lasers that they competed well.

“Even though we lost, I think the guys felt like we competed pretty well,” said Mayer.

Mayer was excited to see the progression of the Corsairs while battling against the Lasers.

“I’m really excited to watch this team grow,” said Mayer. “We’ve got a talented group of student-athletes and I feel that we can compete with anyone in the state. I think if we continue to improve our serving and passing and are able to limit our hitting errors, we’ll have a great shot to compete for a state championship.”

The fifth match decided the game and the Lasers won 15-11.

“In terms of the Irvine match, I think it was a good experience for us,” said Mayer. “We lost in five tough sets to IVC who are currently undefeated. We went down two sets to one and showed great resiliency in winning the fourth set and coming back from an early deficit in the fifth.”

Next game for Santa Monica College is at home against Golden West today at 6 p.m.