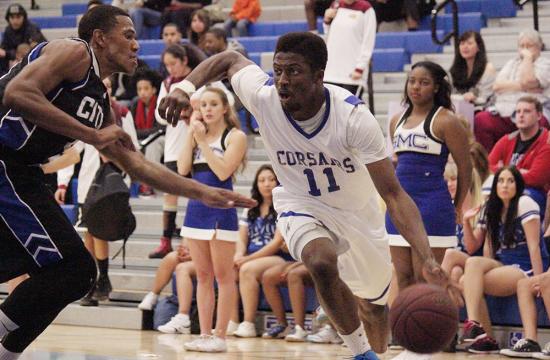 With 44 seconds left to play in the basketball game, it looked like Citrus College(13-10) would upset Santa Monica College(15-8) after Owls guard Steven Thornton Jr. stole the ball away from Corsairs guard Keilan Horton and easily scored a layup to put the game within two at 70-68.

But the Corsairs managed to burn down the clock until the Owls were forced to foul SMC guard Adam Griffen who made a free throw to extend the lead of the Corsairs to 71-68 with 15 seconds left in the game.

Higgins then flung the ball down the court to a wide open David Nwaba who dunked the ball to effectively end the game with four seconds to go at 73-68.

SMC Basketball Head Coach Jerome Jenkins was proud of the way that the Corsairs handled themselves against the Owls.

“‘I’m so proud of our young guys,”said Jenkins. “We had a lot of adversity coming into the game trying to get ready for school and guys getting their units.  It’s just been a hectic day and the guys handled the adversity really well.”

Top scorer for the Corsairs against the Owls was Horton who scored 19 points in the game.Horton is currently ranked 13th in the Western State South Conference in individual scoring with 322 points for the 2012-2013 season.

Nwaba, who scored 18 points against the Owls, is currently ranked third in the Western State South Conference in individual scoring with 394 points for the 2012-2013 season.

With the win, the Corsairs solidify second place at 6-4 in the highly competitive Western State South Conference and have an excellent chance at going to the playoffs.

The Corsairs lost to the Cougars earlier in the season 84-74.

Next game for SMC is away at College of the Canyons in the WSC-S Conference Tournament Thursday-Friday with the time TBA.