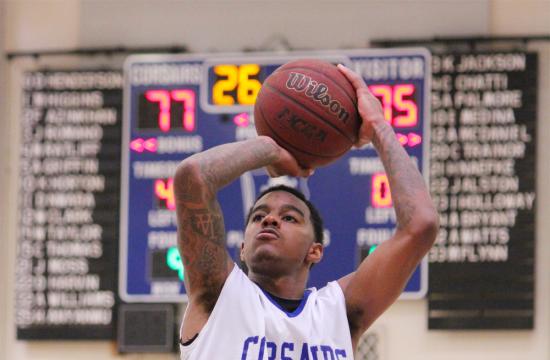 Santa Monica College (14-7) won at home against Glendale (9-14) Saturday afternoon 81-75 in a close game where the Corsairs pulled off the win late in the fourth quarter to gain a Western State South Conference victory and advance closer to securing a playoff birth.

SMC Basketball Head Coach Jerome Jenkins was excited that the Corsairs won against the Vaqueros.

“We played a hard game today,”said Jenkins. “We knew it was going to be a tough game but we were able to get the job done.”

With the win, the Corsairs are currently tied at 5-3 in the highly competitive Western State South Conference with Citrus College(11-9).

“We are in second place right now so we are going to try and keep second place going for us” said Jenkins. “We got our big game now coming up with Citrus to try and solidify this so we can get ourselves into the playoffs.”

Top scorer for the Corsairs against the Vaqueros was SMC guard Madison Higgins who scored 19 points in the game.

“Madison is our team captain and our leader and he’s very solid,” said Jenkins. “He’s got one of the best mid-range games I’ve seen in a long time.”

Higgins, who has been steadily improving in the scoring category week to week, is currently ranked 34th in Individual Conference Scoring with 188 points for the 2012-2013 season with a game high 31 points against LA Valley last week.

SMC guard Keilan Horton also had 19 points in the game against the Vaqueros.

Horton has developed into a force for the Corsairs and is currently ranked 13th in the Western State South Conference in individual scoring with 303 points for the 2012-2013 season.

SMC guard Will Taylor had a breakout game against the Vaqueros scoring 15 points.

“Will shot the ball for us real good in the first half and got us our lead,” said Jenkins.  “And that’s what we need, a little energizer.”

SMC forward David Nwaba, who scored 14 points against the Vaqueros, is currently ranked third in the Western State South Conference in individual scoring with 376 points for the 2012-2013 season.

Forward Admasu Williams, who broke his nose in the game against Bakersfield College a week ago, is still waiting to be seen by a doctor.

“Admasu broke his nose and we hope to have him back in time for the playoffs,” said Jenkins.  “We have seen enough broken noses this season.”

Jenkins has a mask waiting for Williams once he is cleared to return.

Next game for the Corsairs is a battle against Citrus College (12-9) for second place in the Western State Conference at home at 5 p.m.