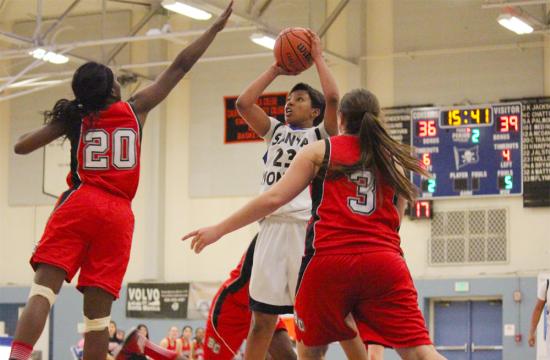 SMC women’s basketball (8-15) has had some tough losses this season but the loss against Bakersfield 12-10) was a difficult defeat to handle as the Corsairs were intially up by 12 points early in the game before the Renegades were able to come back and win 71-64.

With the loss the Corsairs drop to 0-7 in the Western State South Division.

SMC assistant basketball coach Dika Firmansyah is convinced that the Lady Corsairs have more potential then they have been displaying out on the court this season.

Against Bakersfield College, the Corsairs came out hot spreading the ball around the court and sinking seven baskets in the first half jumping to a 15-3 lead before the Renegades were able to respond.

Bakersfield Basketball Head Coach Paula Dahl called a time-out after SMC scored seven straight points in order to convince the Renegades that they could win over the Corsairs.

“This is the first time that we have played man to man since Christmas time,” said Dahl. “I called one time out and I asked my players how much time was left in the game and they said 32 minutes. I told them that we had plenty of time but we just gotta do what we are supposed to do.”

Midway through the first half, the Corsairs still had a good lead over the Renegades at 24-13 with 6:52 left on the clock.

But the Renegades responded and cancelled out SMC’s whopping lead until they were within two points 32-30 at halftime.

Dahl thought that SMC came out hard and brought the heat catching the Renegades off guard but were unable to sustain the momentum throughout the game.

“They really brought it after us and we weren’t ready to go, but I was really pleased that we came back to within two at the half,” said Dahl. “Santa Monica kept battling but we ended up on the lucky side of the win tonight.”

During the second half, Bakersfield came out strong taking the lead for the first time in the game with Haley Huntington hitting a three straight out of the gates in a shot that shifted the game in favor of the Renegades.

The Corsairs could only play catch-up the rest of the game as the Renegades went up ten points by the middle of the second half and sustained that lead with a basket by Sabrina Lopez at 65-55 with 1:01 left to play in the game.

SMC forward Imani Holloway led the Corsairs in the box converting 7-14 shots for 14 points in the losing effort against the Renegades.

“We are not there yet but we have done everything in practice and before games to change,” said Firmansyah. “But it’s not there yet.”

Next game for the Corsairs is away against West Los Angles College Wednesday at 7 p.m.