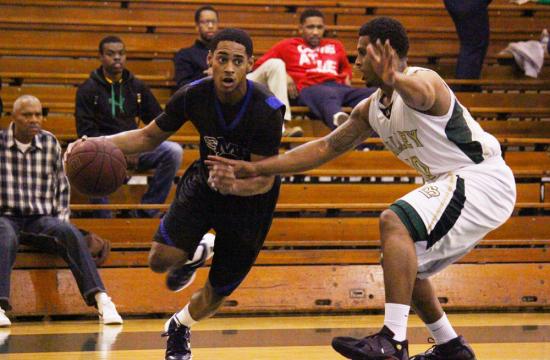 SMC guard Keilan Horton thought that the game was a hard fought battle and was glad that the Corsairs won.

“LA Valley is a really good team and very scrappy,” said Horton.  “But we came out and pulled off the victory.”

With the win, the Corsairs, who are 5-3 in the highly competitive Western State South Conference, nudge past Citrus (11-9) who are 4-3 to claim second place and keep their playoff hopes alive.

Horton scored 13 points in the game with ten points in the second half and is ranked number 13 in the Western State South Conference in individual scoring with 284 points for the 2012-2013 season.

“I have teammates and I look for them and trust them,” said Horton.  “I can also create for myself and it just all flows.”

SMC forward David Nwaba led the Corsairs with 27 points against the Monarchs.

Nwaba is ranked third in the Western State South Conference in individual scoring with 362 points for the 2012-2013 season.

The Corsairs kept their playoff hopes alive at home against Glendale(9-13) winning 81-75 over the Vaqueros Saturday afternoon.