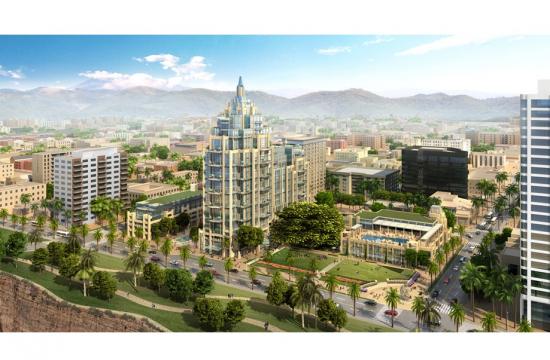 The Fairmont Miramar hosted an open house Thursday, but there were a few Santa Monica residents who were not to happy the event was held for an invite-only group of about 150 residents to learn more about the progress of the hotel’s planned redevelopment.

The hotel unveiled plans that it has designed a taller building with an east-west orientation, according to the Miramar’s website.

“The new Ocean Building will sit majestically at the center of the site, balancing the tall neighboring buildings to the immediate north and south while stepping down on the eastern end to respond to the scale of the Huntley Hotel,” the website says. “The plan minimizes view impacts from neighboring buildings to the east and puts the scale of the proposed project in context with the nearby hotel, condominium and office buildings. The plan will be significantly less dense than the surrounding buildings.”

In its invitation to the Thursday open house, the Miramar’s representatives did try to acknowledge they tried to receive input from as many people as possible.

“We have reached out to over a thousand Santa Monica residents, businesses and stakeholders for input and comments on the future of the hotel,” the invitation read. “Our preliminary plans were also the subject of extensive public hearings before the Planning Commission and the City Council last year. The input received was enormously helpful, and provided invaluable guidance.”

Still, some who questioned why the open house, advertised as an unveiling of plans for its proposed expansion and revitalization, was invite-only, and even then limited to just 150 people.

“I was very disappointed that the entire community was not invited to the unveiling event,” local resident Avery Auer said. “Why would the Miramar developers not plan right from the beginning to include residents who are clearly interested in learning more about their project?

“The hotel’s massive expansion project will have significant impacts on Santa Monica residents from across the city. So why not create a public event where ALL community members can learn more about the new plans and share their input?”

Earlier this week, the Santa Monica Coalition for a Livable City (SMCLC) sent an email to its supporters stating: “Turns out we are not welcome at the Miramar Hotel’s ‘open house,’ where our neighbors will have the opportunity to learn more about the Miramar project. We just received an email from the ‘Miramar Team’ that space concerns prohibit including those who did not receive an ‘initial invitation.’”

The SMCLC is one of the groups against Miramar’s expansion and revitalization plans.

Thursday’s open house was the latest chapter in a redevelopment project that has stirred up quite the discussion in Santa Monica. Miramar’s expansion and revitalization plans hit a fever pitch in early 2012, when the project came to the city council as a “float-up.”

The hotel’s proposed plans also called for 484 parking spaces, up from the current 160 available. Also proposed: adding 120 condominiums and 40 affordable units to the project.

Whether or not these proposals were altered, some members of the public wish they could have found out at the Feb. 21 open house.

One resident told The Mirror that while MSD Capital and the Fairmont Miramar are private entities and have the right to limit those who could attend the open house, the hotel and developer were missing out on an opportunity.

“The Miramar is a private company which has the right to invite anyone to their design preview. And to keep out people who haven’t been invited,” Susan Scarafia said. “Limiting their invitation list is a missed opportunity, though, to genuinely involve stakeholders.”

She believed the hotel developer and owner could better refine its community outreach.

“The developers did outreach before, but not the right kind – to the entire community. The developers SAY they’re listening to the community. Just their fans, or all of us? Will they post the new renderings and proposal on their website and ask the city and neighborhood associations to do so too so the community can be easily informed?” Scarafia asked.

Auer questioned whether MSD Capital is being fully transparent with its plans for the Miramar.

“It is critical that these developers be open and transparent,” she said. “Instead, right out of the gate, it seems they are limiting access, which is disappointing to say the least. I sincerely hope that they will publish the dates of any upcoming meetings in which they will share their plans and be open to feedback from the larger community.”

Scarafia was also hopeful the Miramar’s owners and developers would follow-up the invite-only open house with making its plans available to the public.

“We’re looking forward to seeing a range of smaller project options in response to what public officials and residents have been clamoring for,” Scarafia said. “We want to ensure that the Environmental Impact Report includes a few reduced-size alternatives to give decision-makers a real understanding of how downsizing will reduce the adverse impacts including increased traffic, parking and neighborhood compatibility.”

Representatives of the Miramar or MSD Capital were not immediately available for this article.