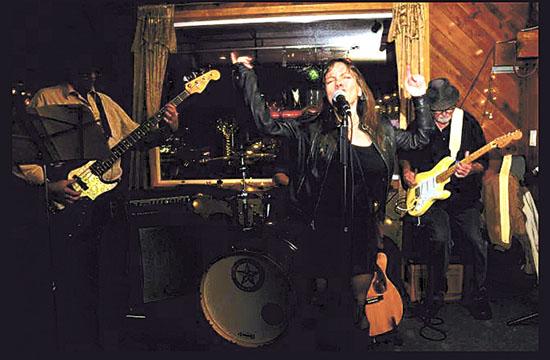 Live music and happy hours tend to bring in more customers for most restaurants.

Next Friday, March 1, Sonny McLean’s presents a very special band: Kat and the Blues Hounds from 9 pm until 12:30 am.

This local band has been making waves and creating a name for itself in the Los Angeles area.

Known for her “Strong Woman Blues,” this 4’11” blues dynamo knows how to put on a show.

Having worked on Broadway, she is a true entertainer with a huge voice, topped off with tons of passion.

Lead guitarist Nick Henry has worked with R&B Sax man Chuck Higgins, Lucky Wright, Guitar Shorty, Joe Houston, and the Coasters, just to name a few, while Tim McKean has studied with Chicago blues masters and has fronted various bands of his own with eclectic styles.

Mitch Montrose started playing the drums when he was just eleven years old. He studied in New Orleans, with the great Chris Lacinak and has worked with the “Porterhouse Bob” band for the past 13 years.

Bass player Jon DeRienzo has also played on many of the same projects as Montrose and Henry with various bands through the years.

Sonny McLean’s Irish Pub features has entertainment six nights a week with live music every Friday night as well as karaoke on Wednesdays, Saturdays, and Sundays.

Owner Grant Woods is looking forward to the March 1 performance by Kat and the Blues Hounds.

“Blues seems to be a crowd pleaser here at the pub,” Woods said.

Happy hour at Sonny McLean’s is available everyday from 4 pm until 7 pm and features discounts on both food and alcohol such as $1 off beer and wine and $3 off pitchers of beer and bottles of wine.

In addition to happy hour, the restaurant offers a late night limited menu from 11 pm to 1 am every night.

“Our appetizer menu has 11 items offering $3 off as part of the happy hour special,” he said. “Selected appetizers include steak tacos, tuna tartar, poblano chicken quesadillas, mozzarella sticks and more.”

Sonny McLean’s is located at 2615 Wilshire Blvd. in Santa Monica. There is no coverage charge for the event.