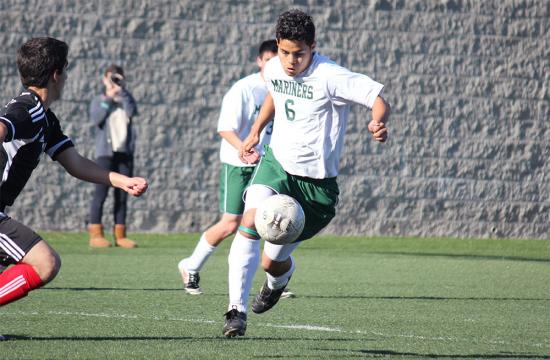 St. Monica (15-5-3) boys soccer defeated Buckley (14-7-1) in the second round of the CIF Playoffs handing the Griffins their first loss of the season in an intense overtime shootout after the game ended in a tie 0-0 Wednesday afternoon at Airport Park.

With the win, the Mariners advance to the CIF Southern Section Quarterfinals.

“Our boys soccer team has made history and made it to the quarterfinals for the first time,” said Patel.  “I congratulate everybody on a huge win over Buckley High School.”

The game ended in dramatic fashion on a sudden death penalty kick shoot-out after the game ended tied up at 0-0.

Patel singled out St. Monica goalie Adrian Zendejas as having a solid game against the Griffins.

“Adrian Zendejas was emphatic in the goal and stepped up when called upon to make some incredible saves,” said Patel.