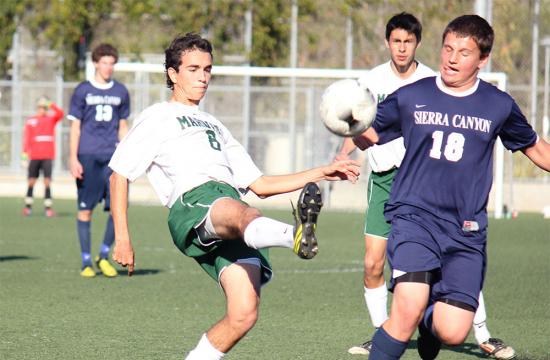 With the win, the Mariners stay alive in the playoffs and advance to the CIF Southern Section quarter finals.

St. Monica Soccer Head Coach Rimal Patel thought that even though the Mariners won the game against the Trailblazers, the Mariners level of play could have been better.

“The win was very sloppy,” said Patel.  “We have had seven days off since our last game and it showed out there.  We gave the other team too many chances.”

Mariners forward Jhonton Aragon scored the only goal of the game against the Trailblazers early in me first half of play.

“It was a fantastic goal,” said Patel.  “He was going away from the play and with a quick turn he lifted it up and it went in.”

Aragon is a new and welcome addition to the Mariners varsity squad now that they are in the playoffs.

“Jhonton was playing JV for us and he stepped up,” said Patel.  “I brought four players up from JV to be with us in the playoffs.  Jhonton was the top goal scorer for our JV squad.”

The rest of the Mariners failed to score against Sierra Canyon and weren’t able to get the ball in the goal even though they took 24 shots.

“Our strength is width,” said Patel.  “We definitely get the ball into the box but weren’t able to score more then one goal today.”

Next game for the Mariners is away against Concordia at the Hansen Dam Recreation Center in Sylmar Friday at 3:15 p.m.