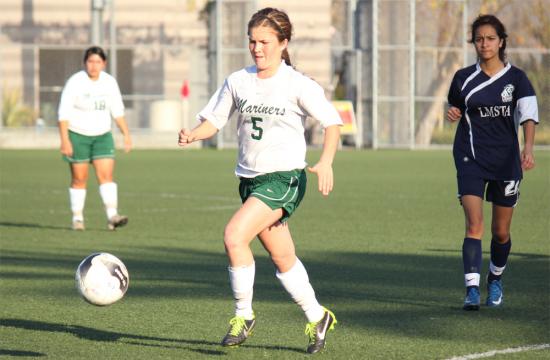 St. Monica (17-3-1) girls soccer won an easy battle against Lennox Academy 6-0 in the first round of the CIF Southern Section Playoffs with forward Sasha Meyer scoring four goals to power the Mariners to victory Thursday afternoon.

St. Monica Girls Head Soccer Coach Maura Diorio thought that even though the Mariners won that they could have played a better game.

“We won and that’s a good thing but we did not play our best soccer so we are going to have to tighten things up for our next round,” said Diorio.

With the win, the Mariners will advance to the second round of the CIF Southern Section Playoffs in Division VII.

Diorio singled out Meyer as having a good game against the Panthers.

“Her play is excellent,” said Diorio.  “She has been scoring three or four goals a game for us.  She’s a goal scorer.”

Meyer has tallied up 30 goals for the 2012-2013 soccer season to lead the Mariners in scoring.

Next game for St. Monica is away against Bishop (11-7-1) in the second round of the CIF Southern Section Playoffs Tuesday at 3:30 p.m.