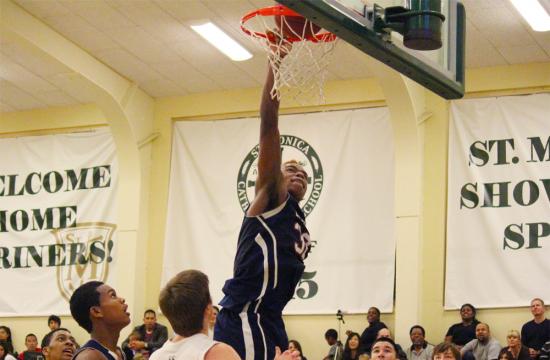 St. Monica(13-15) fell to Brentwood (25-3) by a score of 70-31 in a game where the Mariners seemed faced with a mismatch in every category and forward Leland King dominating the game with dunk after dunk to power the Eagles to victory.

Mariners Basketball Head Coach Khi-Min Jung thought that the Mariners have had a tough season but did the best they could despite losing in the second round of the CIF Playoffs.

“I was happy and our guys played hard all season,” said Jung.  “We were undermanned and fought through a lot of adversity.  Throughout the season a lot of players have been coming and going.”

Brentwood Basketball Head Coach Ryan Bailey was confident about the Eagles chances of advancing far into the playoffs after beating the Mariners.

King racked up 31 points against the Mariners and was a force stealing balls on defense and dunking on offense.

“It was a very fun game,” said King.  “We wanted to make a statement tonight as last game we came out kind of flat.  This game we wanted to get a lead like we should and keep it that way.

King believes that the Eagles have a good chance at winning the CIF Championship this year.

“Our team is going to the championship from here,” said King.  “I know it.”

Next game for Brentwood is against St. Margaret’s in the CIF Quarterfinals Tuesday at 7 p.m. with the location TBA.