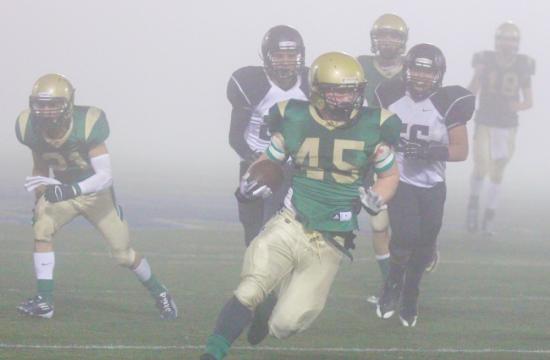 St. Monica Mariners running back Kevin Holubowski has been accepted into the Airforce Academy on a full sports scholarship and is expected to sign soon in the wake of two exciting football seasons where he piled up more than 1600 yards and rushed for 22 touchdowns.

Mariners Football Head Coach Adam Guerra said he was proud of how Holubowski has helped to elevate the school’s football program.

“Kevin was definitely our top offensive weapon,” said Guerra. “The last two years St. Monica has won a lot of games and he has been a big part of our success. Kevin helped to put St. Monica back on the football map and he has left a legacy to for the program to continue on.”

As captain, Holubowski led the St. Monica (8-5) football team deep into the playoffs rushing for touchdown after touchdown in a long 2012 season that seemed nothing short of magical.

Holubowski wasn’t the only Mariner to have success during the 2012 season, but as St. Monica’s primary offensive weapon he was the most prominent rusher gaining 1200 yards and averaging nine-yards a carry.

During the season, Holubowski battled to stay healthy, but that didn’t hinder his ability to rush hard in the playoffs.

“He went down in the middle of the season but came back late in the season to seal the deal for our playoff games,” said Guerra. “We didn’t have him against Mary Star or Brentwood.”

By the end of each game, it was common to see Holubowski limping off the field with blood trickling down his arm to the sounds of the Mariners faithful clapping as he exited the field of play after giving the game of football his all.

Holubowski added the spark that St. Monica’s needed in the Mariners late three-game win streak that started with a convincing conquest over Bellarmine-Jefferson 34-14 to qualify for second place in the Santa Fe League.

With the crucial win, the Mariners were propelled into the playoffs with a 2-2 league record.

“Kevin put the work in year round both off season and it paid off in the playoffs,” said Guerra.

In the first round of the playoffs, St. Monica shocked Kern Valley (7-4) knocking the Broncs out of the first round in an intense battle that ended with the Mariners on top 28-26.

The Mariners went on to defeat an excellent Boron (10-2) team in the quarterfinals 19-16 leaving the Bobcats, who were undefeated in the Desert Mountain League at 5-0, in shock in front of a large home crowd on the Corsair field.

Leadership was part of the role Holubowski learned while with the Mariners.

“Kevin is a very emotional player and everybody knows how much he cares,” said Guerra. “This gave him credibility and this is why people listen to him.”

An official signing ceremony with the Airforce Academy Falcons is TBA.