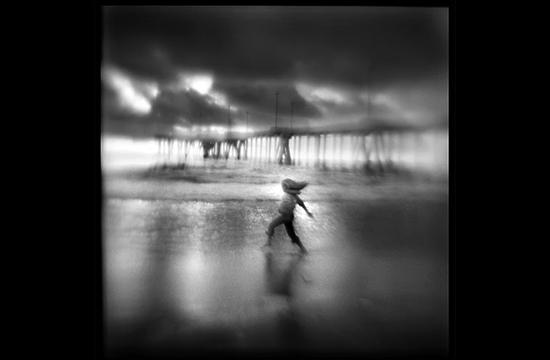 An artist reception will be held this Saturday, Feb. 2 from 5-8 p.m.

In “Who Looks Outside, Dreams; Who Looks Inside, Awakes,” Burnstine uses special homemade cameras, with lenses she custom created and other makeshift parts, to distort her photos at the point of conception.

Her images almost seem like mirages. Edges are blurred or out of focus, and the photos’ central subjects – whether buildings, vistas, corridors, or people – are also bathed in translucence.

There are parallels to 19th century, when Nicéphore Niépce and Louis Jacques Mandé Daguerre produced images that – because of long exposure times and a fragile technical process were practically ethereal.

Burnstine is one of the few photographers today avidly pursuing alternative processes to create an idiosyncratic and deeply personal visual landscape.

In order to be able to portray her visions entirely in-camera (rather than with post-processing manipulations), she created her own hand-made film cameras and lenses that are frequently unpredictable and technically challenging.

These limitations allowed her to rely on instinct and intuition, both tools of which are used in dream interpretation as well to create her singular synthesis of magic and reality.

Susan is represented in galleries across the country, widely published throughout the world and has also written for several photography magazines, including a monthly column for UK publication “Black & White Photography.”

In the past six years, Burnstine has won a slew of awards, her latest a coveted one for photographers: a gold medal in the 2011 Prix de la Photographie Paris competition.