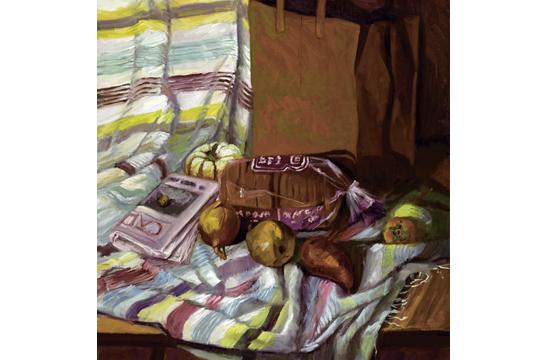 In 1993, TAG Gallery at Bergamot Station was established as a not-for-profit corporation that has since grown to a member owned community of about 40 artists.

On Tuesday, a new exhibition opened to the public featuring the works of three artists: Fielden Harper, Michael Knight, and Joan Horsfall Young.

An opening reception will be held this Saturday, Feb. 2 from 5-8 p.m. for the exhibition that runs through Feb. 23.

Harper moved from her native Kentucky to the Los Angeles area in the early 60s.

Settling in Santa Monica, she quickly became fascinated with the interwoven landscape of Southern California’s buildings and beaches.

Chronicling landmarks from the pier and the lifeguard towers to the graceful curves of familiar freeway overpasses, Harper’s paintings began to reflect her keen consciousness of her surroundings.

“Certain buildings are like old friends to me,” Harper said.

Tapping into her own personal memories, Harper records subtle seasonal changes in light, shadow, and shifting clouds while recalling the history of Santa Monica through these images. Her own stories are intertwined with those of her viewers and their shared connection to these places.

In his current show “Immigration Lines,” Knight extends his ongoing exploration of human migration and immigration.

Returning to the crow imagery that he uses as a visual metaphor for human travelers, Knight has deepened the significance of these mixed media works with the inclusion of immigrant poetry and song lyrics. By layering verbal reflections into his work, Knight exposes emotional and psychological states integral to every pilgrim’s journey. Serving as image, symbol and message, these lines helps to illuminate and personalize shared human experience.

Written in a variety of languages, prose blend with crow imagery to represent time, growth, and change as a cultural thread that spans generations.

“My goal is to create images that help me to understand the constant evolution of societal pressures, cultural identities and definitions of self,” Knight said.

As a result, these mixed media works act as a visual culmination of personal histories.

In her new show “Back to Basics,” Horsfall Young was inspired by a departure from societal excess.

Looking to the simple pleasures that come with self-reliance – scaling back from the expenses of going out and seeking the services of others in favor of homemade entertainment.

Motifs of elegant simplicity are the focus of Young’s current show – a child skipping stones on a lake; a peaceful view of trees in falling snow; a counter of grocery staples.

“My paintings are rendered with lots of thick buttery paint,” Young said. “I strive for paucity. I want my paintings to be comfortable.”

Young’s loose brushstrokes capture the subtle movement and natural highlights of her subjects while displaying her mastery of plein air and still life oil painting.

For more information about the exhibits or TAG Gallery, visit www.taggallery.net.