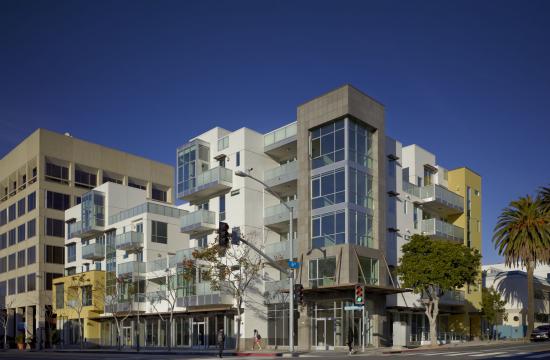 Moving from New Haven Connecticut to Santa Monica in 1964 to attend the USC Masters in Cinema program, I was fortunate to find an apartment at 359 Sycamore Road in Santa Monica Canyon. Venturing into downtown Santa Monica for the first time in August 1964, I remember seeing real estate company signs everywhere. Third Street was a street far from its transformation into Third Street Promenade.

In the past two years, a new luxury apartment building has been under construction at the corner of Sixth Street and Santa Monica Boulevard. As a former Project Manager for large out of the ground project for Kajima International Construction, I have watched with great interest the various stages of construction.

Only days before excavation started at 529 Santa Monica Boulevard, the one story building housing Hi De Ho Comics, my son’s favorite comic store, was reduced to bricks. The new store is now located at 1431 Lincoln Boulevard next to CVS Pharmacy.

For the past two years I have observed the construction of The Bond, a 40-unit luxury apartment building designed by David Hibbert AIA. Located on the corner of Santa Monica Boulevard and Sixth Street, The Bond is a landmark building in the city.

Steve Bond, owner of The Bond, says “Creating something like The Bond is an artistic endeavor. It all starts with a dream – a vision – like writing a script. Then you have to put the team together.”

David Hibbert, Architect of The Bond, has designed a unique building whose glass window treatment provides superb views. Touring the building I learned that views of Santa Monica and the east can be seen while the view to the west is excellent since the adjacent bank building to the west of The Bond is set back so that occupants can see all the way to the Pacific ocean.

Steve Bond says he chose David Essey from a short list of General Contractors after visiting a project Essey Construction built near Beverly Hills. Bond also said that construction of The Bond was completed ahead of a number of projects, which started construction before The Bond.

John Warfel, Development Manager for The Bond says, “Quality came to a great location, downtown Santa Monica, on a corner with light and air.”

With 40 one- and two-bedroom apartments and four affordable housing units, The Bond will not be sold. Owner Steve Bond said the building would remain in the family. In addition, Santa Monica does not have an ordinance that permits conversion from apartments to condominiums.