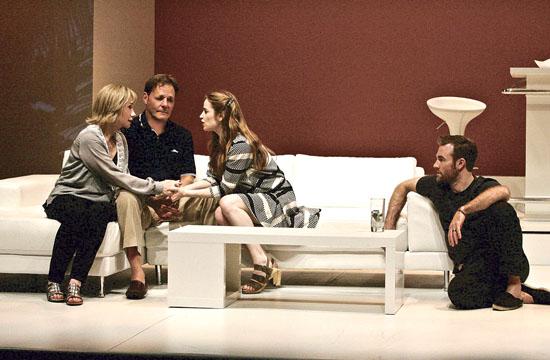 Australian playwright Joanna Murray-Smith’s “The Gift” was recently premiered at the Geffen Playhouse and this is one gift you might want to return.

Crammed with what appears to be every thought she’s ever had in her head from the creeping boredom of a long marriage to the role and responsibility of the artist, to the trials and tribulations and sacrifices of parenthood to global warming, etc. Well, you get the idea.

That said, it’s really challenging to write a categorically negative review when the talented director Maria Aitken assembled such a top-notch cast, each of whom gives a very creditable performance.

The action begins with Sadie (Kathy Baker) breaking the fourth wall to deliver a monologue directly to the audience. This device is used by both Sadie and her husband Ed (Chris Mulkey) in the beginning of the play and is pure exposition talking about past events and does not move the action forward. Eugene O’Neill used this device in many of his plays but it served to tell a relevant story and to keep the drama unfolding. Don’t tell me; show me. But I digress, as does the rambling, off-the-wall narrative.

The story is about two couples that meet at a tropical resort and become instant buddies, sharing intimate stories about each of their lives. The middle-aged couple, who are childless, are celebrating their 25th anniversary. Played by a very talented pro, Chris Mulkey and an equally talented Kathy Baker, both of whom, despite poor material, manage to deliver excellent performances. The younger couple, who are parents of a little girl, is played by Jaime Ray Newman as Chloe and James Van Der Beek as her husband Martin, both of whom also give multi-layered, believable characterizations.

These new best friends imbibe wine and soon Chloe suggests that they play the truth game, each one revealing an intimate secret – always dangerous “Who’s Afraid of Virginia Woolf” territory who did it so much better. Secrets are revealed. An event takes place on the beach which is life-changing for Ed and the two couples agree to meet one year later which is when the 90-minute, without an intermission, play really goes off the deep end and strains credibility. In the name of loving their child too much, Chloe and Martin make an incredulous offer of a gift to Sadie and Ed who actually wanted to give the young couple a gift for Martin’s display of heroism on the beach. It was at this point that I put the cap back on my pen and waited rather impatiently for the end that I hoped would be mercifully soon.

In addition to the excellent performances, “The Gift” is a visually stunning production with a gorgeous, multi-functional set by scenic designer Derek McLane, who, with the often-used device of projections, creates a very compelling storm sequence with high tides, thunder, and waves breaking. Lighting designer Peter Kaczorowski creates a delicious profusion of colors that, coupled with the excellent performances, serve as a distraction from the poor narrative.