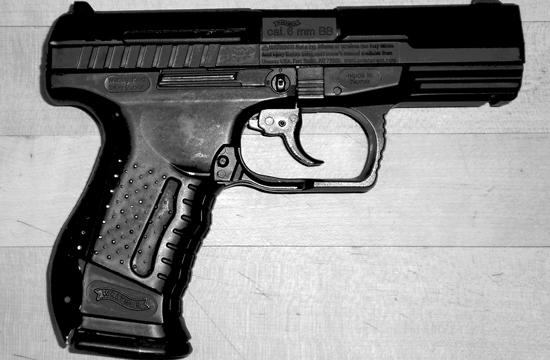 The photo you see is a picture of the gun in my life right now. It’s not a real gun; it’s a prop for my current theater piece “AUTO PARTS.” It’s used at a moment when a jilted wife seeks her revenge on her husband. It’s actually a pellet pistol, used to shoot plastic pellets. They are available at most sporting goods stores and this one cost me $18 bucks.

When I bought the pellet pistol it was already the size and detailed shape of a real gun, but it was made of clear plastic and had an orange tip establishing that it was not a real or lethal weapon. I first removed that orange tip. Then I painted it with flat black spray paint, and it changed dramatically: It was now a convincing replica of a real gun. When the paint dried, I held it in my hand and felt a shiver. I could walk down the street with this ‘prop’ and someone might rationally decide to shout “gun” and… well, let’s not go there.

That any citizen can easily transform a readily available sporting good into a convincing-looking gun that could be used to intimidate or rob others says something about our current culture of guns. But I would rather discuss the issues I wrestled with in deciding to represent a handgun in my theater piece. Because this column has at various times urged Hollywood and the entertainment industry to have some second thoughts about the brandishing of guns in all platforms of entertainment.

I wrote “AUTO PARTS” before the Newtown shootings. I’m not proud to confess that I didn’t have a conflict with writing a prop gun into the piece until after Newtown. Why didn’t it occur to me earlier? Perhaps I had the same short-term amnesia that most of America seems to suffer from in forgetting about our gun epidemic until another tragedy brings it all back with fresh disgust. But… was I compelled to write the prop gun out of the piece?

In the play my ‘gun’ is deployed in the following manner: A woman appears on stage, surprising her husband who has just had sex with another woman. Because of the angles in the scene, only the husband sees the wife approach. Then the wife pulls out the weapon. A moment, then she lifts the gun and we’re not certain who she’s targeting. Black out. A shot rings out from a recorded sound effect. The play then continues without more gun activity.

But the heartbreak of sudden death by gun shot and the impact of the murder on those involved are integral to the content of the play. Put another way, unlike many violent films or video games, someone isn’t killed just for the buzz that might give the viewer or player. There is no slow- motion blood spray or visceral carnage. Certainly no one jokes about the shooting, and no one is killed with the shooter offering some funny remark after having taken a person’s life. Hurt, consequences, loss… all are represented and discussed.

Still, use of guns in story telling can never escape the criticism that guns create a narrative short cut. And I am as guilty of taking that short cut as any other writer who has done so. I could now make several arguments for my “need” to have gun action in my play: That I needed the realism, that the play has a noir-ish patina that requires noir-ish death by gun, or that there just wasn’t another way to make that moment exist in the play without a death by shooting.

What I might have done is written another play. I could stand so firmly behind the criticism I have leveled in this column against violent gunplay in fictional narratives that I would never represent a gun or gun killing in my own work. Alas, the depiction of life in America in my theater work would then never invoke a tragic reality: That Newtown events do occur, that they occur with sickening regularity, that we have a gun problem and that our President is struggling to take guns off our streets as other countries have succeeded in doing as even more U.S. citizens die from gunshots.

So I own-up to this dilemma for story tellers and writers. How do we continue a dialogue about the guns in our lives and what I call our “gun love” and also avoid contributing to the problem? There might be one simple first step: We could decide to never represent the deployment of guns as being cool, sexy, ‘hot’… or in any way good.