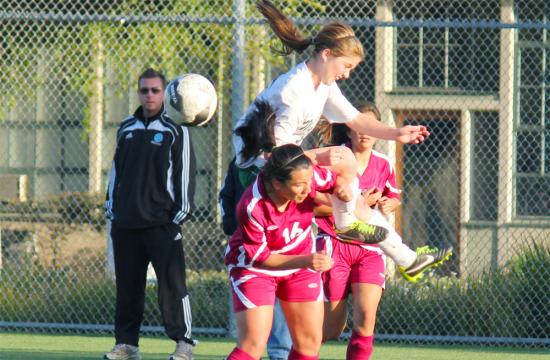 The Westside entered four high school teams in the playoffs to compete in a winner advances tournament to determine how far teams will advance toward the championship round of the CIF Southern Section Girls Soccer.

Crossroads and St. Monica advanced furthest of the Westside girls teams in the CIF Playoffs making it to the CIF Quarterfinals before being knocked out.

*Santa Monica won against Colony 0-0 in a 4-3 overtime shootout at home Thursday, Feb. 14.

Santa Monica lost against Quartz Hill 4-0 in the second round of the CIF Southern Section Playoffs at home Tuesday.

*St. Monica won in the first round of the CIF Southern Section Playoffs against Lennox Academy 6-0 Thursday Feb. 14.

To read more about the game of St. Monica against Lennox Academy visit the story at smmirror.com

*Crossroads won in the first round of the CIF Southern Section Playoffs against San Gabriel Mission 13-0 Thursday Feb. 14.

To read more about the game of Crossroads against Vistamar visit the story at smmirror.com.

*St. Monica lost against University Prep. in a 5-4 shootout after a 1-1 tie in the CIF Quarterfinals at Airport Park Thursday afternoon.

*Crossroads lost against Arroyo Grande 3-1 in the CIF Quarterfinals away Thursday evening.

To read more about the game of St. Monica against University Prep visit the story at smmirror.com