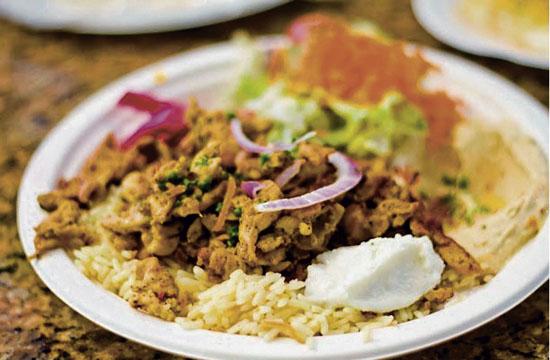 Z Garden is celebrating its one-year anniversary at 2350 Pico Blvd with a celebration this Saturday, Feb. 23 from noon to 3 pm.

The restaurant’s owners have invited their long time friend Samir Kamoun (pictured right) to perform as a Charlie Chaplin (which he did for 30 plus years for Universal Studios).

The celebration will include free food and a jumpy house for children.

Shadi Abed, co-owner of Z Garden, said making the restaurant a neighborhood hangout was a priority from day one.

“People now stop me in the neighborhood to talk to me about the food,” Abed said. “We have become a place to hang out and watch the African Cup Soccer, Olympics, and NFL playoffs. This last year we welcomed our fellow Tunisian who won Gold at the Olympics in the 10k swim event (he trained at USC). We have a wide variety of customers from families, to SMC students who need a healthy cheap meal, to workers from offices in the neighborhood.

Abed said his partner was a chef for a Saudi Prince for three years. “We had some ideas for what we wanted to do here,” he said.

Abed said the most important concept for the restaurant was keeping everything fresh.

“When we get meat in, we use it in two days, max,” he said. “We only use the freezers for the fruit smoothies.”

He said all of its meat was local from California and halal – food allowed under Sharia law.

Although Mediterranean food is one of the healthiest fares to eat on the planet, Abed said making Z Garden as healthy as possible was a big priority.

“There are things other Mediterranean places serve that we don’t because it’s just all oil,” he said. “Some fresh healthy favorites include chicken shawarma (sauteed marinated chicken breast), the veggie combo with hummus, baba ghannouj, tabbouleh, grape leaves and falafel (the baba ghannouj has a deliciously intense smoky flavor) and of course, the flaky-sticky-sweet baklava.”

Since opening, the restaurant has participated in several fundraisers and school events for JAMS and Grant Elementary School. It has also supported the Team Santa Monica Swim Club at their annual swim meet, supplied volunteers at Malibu International Marathon, and have been an active member in The Pico Improvement Organization.