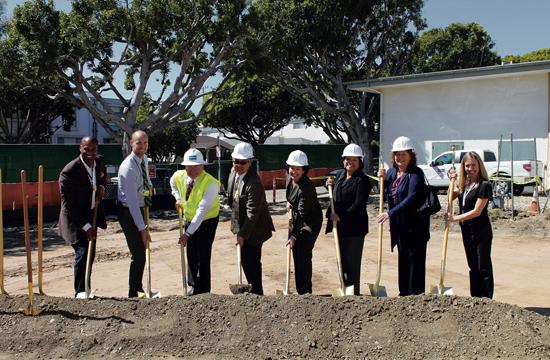 The $16 million project began in December 2012 and is anticipated to be complete in September 2014.

The project is made possible through a collaboration of various individuals and groups.

In an effort to symbolize and capture the importance of these partnerships, team members participated in an “All Hands United” concrete hand-stamping project that will be preserved in one of the sidewalks upon the completion of the new building.

The Lincoln Middle School project was split into three phases.

The first phase was the installation of two relocatable classrooms, a temporary library, and a new 6” fire main line to service the upcoming library and classroom building, which was completed in January 2011.

School Principal Suzanne Webb said she was thrilled with the progess of the project.

“The construction that has been completed so far at Lincoln Middle School has brought student, staff, and family excitement towards learning,” Webb said. “We cannot wait for the next phase to be completed.”

The final and current phase includes removing Classroom Building C and replacing it with a new building that will house a library, chorus room, six classrooms, two science labs with a shared prep room, and two sets of restrooms.

Outdoor improvements include an outdoor classroom with tiered seating and a new library entrance on 14th Street.