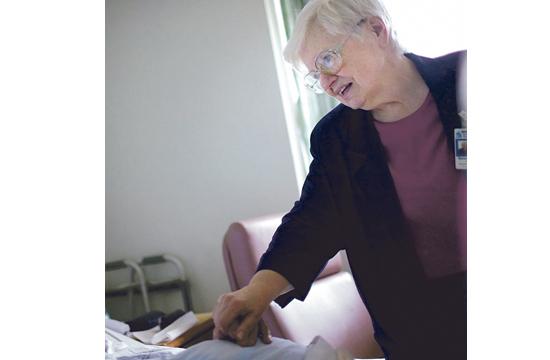 “The scientist in me knows that we don’t thrive alone. When we’re born we need human contact. Throughout our life we know from science and from our own emotions that we need human contact to thrive. In dying we can no more be alone that we can at birth,” says Melissa McRae, a native of Santa Barbara who studied at both UCSB and UCLA.

She currently works at St. John’s as a Surgery Administrative Coordinator, but also volunteers for the No One Dies Alone (NODA) program at St. John’s Health Center.

“I’m not religious but I am spiritual,” she continues. “It makes me feel good to be able to be with the dying person, to touch them, to hold their hand, to make human contact. I want to be there for people. It means a lot to me.”

NODA was the idea of a Critical Care Nurse named Sandra Clarke.

Clarke wrote, “There seems to be an unwritten universal protocol (among nurses) for the patient who is dying without the presence of friends or family. One’s other patients’ care will be taken over by nearby nurses. Rituals of passing are acted out: I’ve seen nurses quietly singing, holding the hand of the dying, and, in all other manners of behavior, showing care and respect while an individual passes on to death. Nurses know the awe of being present at the birth or the death of another human. I believe awe and privilege is an innate human response at these times – the very essence of humanity.”

That unwritten protocol became a formal program now known as “No One Dies Alone” and it was founded at Sacred Heart Medical Center in Eugene Oregon in November of 2001. Hospitals and health centers across the country have followed their lead. St. John’s began their NODA program in 2004.

Sister Maureen Craig, a person happily known to all who work at St. John’s says St. John’s has a long tradition, rooted in the mission of the hospital, for compassionate care.

“I am thankful for the volunteers carrying our traditions forward,” Craig says. “Through the years our numbers have diminished and work that was once done by the Sisters has now become part of the lives of our volunteers. We love the fact that the loving care we so believe in is being continued by the hundreds of volunteers at St. John’s and by the remarkable volunteers of the No One Dies Alone program.”

“Each one attends orientation sessions and receives training,” Pearlman says. “The current volunteers range in age from their early 20’s to their late 70’s. The requirement for being a NODA volunteer is an interest in being advocates for the patient. These patients are on comfort care and our goal at St. John’s is to see they have no physical pain and to offer compassionate care.”

Pearlman says NODA volunteers are special people and it is not something that everybody can or should do.

For information about volunteering for the NODA program of for any of the St. John’s programs, contact Grenda Pearlman at 310.829.8438 or email grenda.pearlman@stjohns.org.

Marge Gold is a NODA volunteer who provides care to patients and who also helps the Director with program organization and coordination.

Gold says she has learned many things from being a NODA volunteer.

“NODA has taught me to just be there in whatever way the patient needs, to suspend judgment, and to come with no expectations about the patient or the family,” she says. “I hope I always say and do whatever is needed and am of help. It’s a profound experience and I’m grateful to be a part.”

Like other volunteers for NODA, Nancy Cronig has a long series of accomplished volunteer work on her resume.

Currently she is an actor in the Moot Court program at UCLA, is part of the St. John’s Surgery Waiting Room Volunteer program, and a NODA volunteer.

Recounting her NODA experiences, Cronig says she came to realize that even in a coma a person can hear her.

“I play music and sing to them,” Cronig says. “I hold their hand. I wipe their brow and put ointment on their lips and do other things to make them comfortable. I advocate for them when they can’t advocate for themselves.”

She says when she got called for her first patient she didn’t know what to expect.

“I sat with her and held her hand and played music for her,” she says. “I was so thankful to be able to pass on some of the help I have gotten in my life to someone who was in need. It is a healing experience.”

From the beginning of St. John’s to now much has changed in health care.

The work of being a physician and the physician’s commitment to each patient is a value we agree to as a nation. One we all want to protect.

In addition medical technology has made great advancements bringing great benefits but adding to the ethical questions that have always been part of medicine.

A discussion of the forces shaping our national health care is, and needs to be, ongoing. Throughout what can sometimes be a contentious debate, individual people across the nation are using their time to volunteer in ways that support the commitment to each individual patient.

NODA is one part of the answer to the ethical questions of our time.