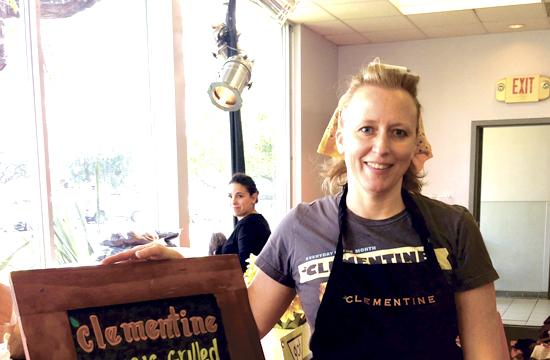 Thirty-four years ago Child supervised 20 amateur sous chefs in the kitchen of Ma Maison in Beverly Hills as they prepared a five-course dinner for 130 people. That dinner was the first of the Planned Parenthood “Food Fares.”

More than 1500 people attended the 2013 PPLA Food Fare at the Santa Monica Civic Auditorium. It was the 17th year PPLA hosted the Food Fare at the Civic. An orange carpet marked the entry into the beautifully decorated and lit Civic, a great venue for this event. Fare goers feasted on food prepared by Chef of the Year Joe Miller.

PPLA chose Miller for the Chef of the Year Award based on his culinary arts, his history of work with PPLA, and his commitment to the goals and values of Planned Parenthood. The list of participating restaurateurs reads like a “Who’s Who” of LA’s favorite chefs.

The credit for planning and organizing this event goes to the PPLA Guild President Marcy Bergren Pine and the approximately 200 Guild Members. They volunteer their time and their expertise to support PPLA’s fundraising and public outreach. The Food Fare is PPLA’s major fundraising event. This year, from attendees, donors, sponsors, and contributors to the event, they raised over $800,000.

“Planned Parenthood dates its beginnings to 1916 when Sanger, her sister, and a friend open America’s first birth control clinic in Brooklyn, New York. In Sanger’s America, women cannot vote, sign contracts, have bank accounts, or divorce abusive husbands. They cannot control the number of children they have or obtain information about birth control, because in the 1870s a series of draconian measures, called the Comstock laws, made contraception illegal and declared information about family planning and contraception ‘obscene.’” (plannedparenthood.org/about-us/who-we-are/history-and-successes.htm).

Planned Parenthood “believes in the fundamental right of each individual, throughout the world, to manage his or her fertility regardless of the individual’s income, martial status, race, ethnicity, sexual orientation, age, national origin, or residence. We believe that respect and value for diversity in all aspects of our organization are essential to our well-being. We believe reproductive self-determination must be voluntary and preserve the individual’s right to privacy. We further believe that such self-determination will contribution to an enhancement of the quality of life and strong family relationships.” (plannedparenthood.org/about-us/who-we-are/vision-4837.htm).

Serena Josel, the Director of Public Affairs for PPLA said, “In LA it can become easy for us to become complacent but when you look at what’s happening across the country you can’t be complacent. From 2010 to 2012 there were over 2000 pieces of anti- omen’s health legislation in the form of anti abortion and anti birth control bills across the country.

“We served over 136,000 patients last year in our 19 clinics and 80 percent of our patients live at or below the poverty level. Our goal is to never turn anyone away,” said Josel. “Fewer than 7 percent of patients are teens and the majority of teen patients come with their parents. We provide reproductive health services, family planning, contraception, abortion, screening for breast, cervical, and testicular cancer, HIV screening and counseling, STD testing and treatment. We work to help people have healthy families.

“California often leads the nation on reproductive rights health care and that’s a signal to us to keep on. We follow common sense, evidence based policies and when we don’t get bogged down by outside politics we can concentrate on our essential work.”

PPLA expenses totaled approximately $48 million in 2012. Over $5 million came from donations. The main source of funding is from reimbursements for individual health services from private health insurance companies or from public health coverage such as California Family Pact or from health care programs supported by Federal funding.

The Act provides funding for family planning services and was supported by a coalition of Democrats and Republicans.

Signing the Act, Nixon said, “No American woman should be denied access to family planning assistance because of her economic condition.”