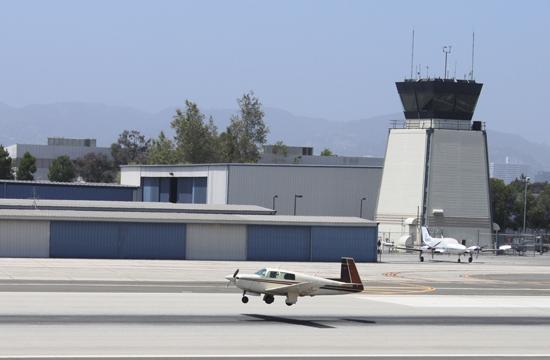 Two anti-airport groups have written to the area’s federal representatives in Congress to push for the closure of Santa Monica Airport’s (SMO) air control tower.

The letter, dated March 3, written on behalf of the Citizens Against Santa Monica Airport Traffic (CASMAT) and Sunset Park Anti-Airport, Inc., (SPAA) also sought the cessation of FAA funds to the airport.

Five pages in length, the joint CASMAT-SPAA correspondence was penned just one day after an estimated $1.2 trillion in federal cuts went into effect March 1. Also referred to on Capitol Hill as sequestration, the slash in funding also resulted in the Federal Aviation Administration (FAA) having to cut $600 million from its budget.

As part of the $600 million in cuts, the FAA publicly issued a letter identifying 200 airports where tower closure could take place. One of the airports listed is SMO.

Sent to Representatives Karen Bass (D-37th District) and Henry Waxman (D-33rd District), the letter cited several reasons why the federal government should provide less funding for SMO to the point where it is no longer operational.

Among the reasons: too close to residential neighborhoods; recent airplane crashes; new homeowners in the area immediately surrounding SMO who do not care for the airport; the potential closure of 2,000 feet of runway; and, a poll where 80 percent of respondents favored airport closure.

The letter also cited Resolution 6296, approved by Santa Monica’s City Council in 1981, which sought to create a policy of seeking closure of SMO “as soon as possible.”

Finally, both groups contend the airport’s operations would be significantly altered in July 2015 per the expiration of the “1984 Agreement” between City Hall and the FAA.

In making its case, the two groups requested Bass and Waxman to urge the Transportation Secretary to “close the SMO control tower and cease expenditures of FAA funds on SMO.”

A second request: do not close airports or towers where those facilities would benefit the local community.

“We in Santa Monica don’t need the jobs or the economic stimulus of a local airport,” the letter stated. “We ask Secretary (Ray) LaHood to recognize that the FAA has no significant role supporting the local economy here, and to use FAA resources where they may provide a more positive and noticeable economic impact.”

The third request urged the Transportation Secretary to “recognize community sentiment” and “side with middle-class homeowners and against an extremely small number of extremely rich people who are the primary users of SMO.”

“There is no scheduled passenger service at SMO and all travel from SMO is optional,” the request continued.

Lastly, both CASMAT and SPAA sought Bass and Waxman to request LaHood “to recognize long-term trends and use FAA resources where they have a lasting impact.”

The overall spirit of the letter: there is little community support for SMO.

“Other airports are very much supported by the community; SMO is not,” the letter stated. “We urge the FAA to leave open other FAA towers and facilities in preference of SMO, where there is a long history of declining flight operations and growing community opposition.”

Attached to the five-page letter were 12 pages of exhibits, including relevant entries of the “1984 Agreement” and Resolution 6296. Also attached: an overhead map of SMO demonstrating how close some residences were to the runway; a confidence rating of 2012 city council candidates as to who was more likely to “bring about real change” at SMO.