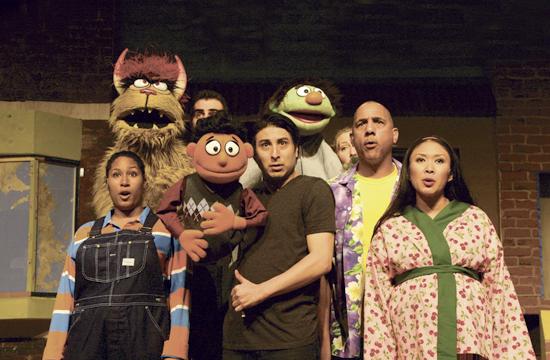 Avenue Q ranks 23rd on the list of longest running shows in Broadway history. The show ended its Broadway run on Sept. 13, 2009, and then reopened Off-Broadway at New World Stages in October 2009.

Santa Monica residents have the opportunity to see a local version of the Tony “Triple Crown” winner for “best musical, best score, and book” at the Morgan Wixon Theatre located at Pico and 27th Street.

The production is a laugh-out-loud musical that tells the timeless story of a recent college grad named Princeton who moves into a shabby New York apartment all the way out on Avenue Q.

There, he meets Kate (the girl next door), Rod (the Republican), Trekkie (the internet sexpert), Lucy (the slut), and other colorful types who help Princeton finally discover his purpose in life.

Making his directorial debut at the Morgan-Wixson Theatre, director Kevin Noonchester most recently played the role of Marlin in Disney’s “Finding Nemo: The Musical” and prior to that was in the Las Vegas company of “Avenue Q” where he performed the roles of Princeton/Rod and Nicky/Trekkie.

Noonchester spoke with The Mirror to give insight into the current Santa Monica production, which opened March 9 and runs through April 6.

Noonchester: I feel that this production of Avenue Q maintains elements that played a huge part in the show’s initial success on Broadway. You see, while the actors are the cast, the puppets are the characters.

The magic of the show lies in the audience investing that the puppets are living, breathing characters rather than props. The producer wanted to place an emphasis on excellence in puppetry and that is how I found my way to the Morgan-Wixson family.

What makes this production at the Morgan-Wixson unique?

Noonchester: Avenue Q is a deceptively technical show. There is another layer to the performance beyond a cast of actors. To truly understand how it all works and why, you have to have done it before. The Morgan-Wixson Theatre’s commitment to excellence shows in their desire to find someone with my unique pedigree with the show to direct.

Wearing three hats as director, choreographer, and puppet director has been a unique challenge, but I believe the result is a cohesive piece of theater that represents what made the show such a success.

Why should people come and see the show?

Noonchester: Many people have heard of a show like “Wicked.” It would take a truly special show indeed to beat out “Wicked” for the Best Musical Tony Award. Come with an open mind and see what all the “fuzz” is about!

How risqué is the show?

Noonchester: Avenue Q is a show with tons of heart and is not simply “a dirty little puppet show.” It is “Children’s Television for Adults” where the lessons aren’t “ABC’s and 123’s,” but rather witty, yet biting lessons about how to get along in the world.

There is foul language, but what is there is far from being “for its own sake.”

It’s hard to say what exact age is right to see Avenue Q – parents should use their discretion based on the maturity level of their children. If you bring your teenagers to Avenue Q, they’ll think you’re really cool. The ads for the show say “Warning! Full puppet nudity!” but keep in mind that these puppets don’t exist below the waist. Theater buffs out there will recall the infamous “wolf costume” with its dangling genitalia from the Broadway “Into the Woods” that has aired on PBS. To me, that single costume was way worse than anything you’ll find in Avenue Q.

What has the experience been like from transitioning from being an actor in the production in Las Vegas to directing here in Santa Monica?

Noonchester: I believe that my experience as an actor working with the original creative team helps me understand where my cast is coming from and what they need to succeed.

However, my six years of puppet experience since my time in Avenue Q helps me to direct not just the actor performance, but the puppet performance as well.

The concept behind Avenue Q and how the puppet and actor work together to create a character is another style of puppetry all its own.

Noonchester: On March 29, there will be a special talk back after the show with Jeff Marx, the Tony Award winning lyricist of Avenue Q.

My history with the show and connections to the original creative team have afforded the audiences of the Morgan-Wixson Theatre and the community of Santa Monica this unique opportunity and it is an honor for me to have him see the results of my work with this talented cast. Tickets for the run are selling out, so get your tickets sooner rather than later.

Fridays and Saturdays at 8 pm

Sundays at 2 pm through April 6