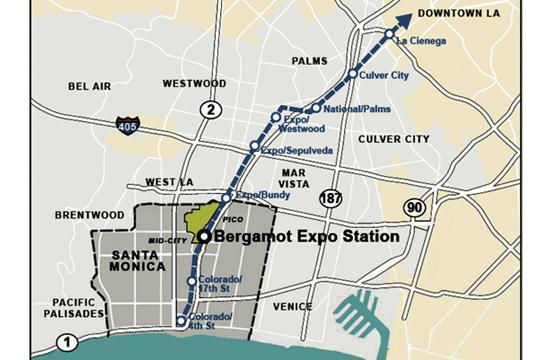 After extended deliberation by planning commissioners, the Bergamot Area Plan – an extensive document that may greatly alter Santa Monica’s traffic circulation, air quality, and land use – was finally in front of Council members for discussion March 12.

With community members providing input during the public hearing, the four Council members in attendance agreed to push the plan forward and allow City staff to begin the environmental review process.

“This plan has personality,” City Planner Peter James said. “It’s a plan that blends the desire for conservation of beloved resources or buildings or uses with a desire for new uses, exciting ones that begin to create the community that we’ve been talking about.”

James added the plan promotes a “cohesive community” in balancing the promotion of arts with local business interests, while also addressing traffic concerns.

To borrow a line former Council member Bobby Shriver used to use, James pointed out the 800-pound gorilla in the room is the Expo Light Rail Line, which is expected to be operational within Santa Monica by 2016.

“The big motivator behind all this is the Expo. It’s coming. It’s really real,” James told Council members, adding construction has already begun on the Expo Line at Centinela and Cloverfield.

Located along Olympic Boulevard near 26th Street just inside of Santa Monica’s eastern border, the Bergamot Area Plan, once realized, hopes to create a “complete neighborhood,” where the already established arts community in that area would be combined with new housing and jobs, open spaces, restaurants, and a “multi-modal transportation network.”

Walkability is a major theme of the Bergamot Area Plan.

“The Plan’s intrinsically sustainable approach connects jobs and housing to transit, and forges new walking and biking paths to reduce vehicle trips. It fills gaps in local services and amenities, and introduces the urban forest into a former industrial area,” City staff stated. “The Bergamot Area Plan looks toward the future, incorporating the best thinking about complete, secure and healthy communities.”

Some statistics of the Bergamot Area Plan:

• Two land use conservation districts will be created;

• 140 acres of industrial land to be converted;

The core components of the Bergamot Area Plan include: open space, urban form, and street networks; land use; circulation and mobility; arts and culture; economic sustainability; and, utility infrastructure.

Still, Council members took advantage of their first true consideration of the Plan to make some suggestions.

The minimum size of apartment units was one key concern. In previous land use deliberations concerning residences, Council members have expressed a desire to have a healthy mix of apartment sizes to promote both families and working professionals to populate the area.

Council member Gleam Davis was worried about how specific – or “prescriptive” – the Plan was in its design requirements and suggested it have some more flexibility.

James replied the areas where the design requirements were “prescriptive” applied to portions of the Plan that abutted existing residential areas, where perception of building mass and access to light and air were of greater concern.

Affordable housing was also brought up, with Council member Kevin McKeown urging City staff to consider matching the range of units available with the diversity of jobs the Bergamot Area Plan hopes to achieve, keeping consistent with its vision to be a complete, walkable neighborhood.

Some residents did speak on the draft Bergamot Area Plan. One stated community members might need more time to digest the Plan because of the density of information presented. Yet another speaker echoed Davis’ sentiment and suggested the Plan be more flexible to accommodate unforeseen circumstances and prevent unintended consequences.

Another resident – Crystal Anderson – was worried portions of the Bergamot Area would effectively spill into the Pico neighborhood and adversely affect the lifestyles of long-time residents in that area.

The draft Bergamot Area Plan has taken about two-and-a-half years to put together.

Mayor Pam O’Connor and Council member Tony Vazquez were both absent from the March 12 meeting. Council member Bob Holbrook was at the meeting earlier but had to excuse himself early to tend to a family emergency.